Road traffic emissions are a major threat to air quality in urban areas. The most common air pollutants contained in traffic emissions are PM10 and NOx. Standards for car emissions and Government policy have produced cleaner individual vehicles, but the general increase in traffic on our roads has offset this. This pollution is most evident in cities with narrow streets and congestion problems.

Dublin's rush hour, where public transport and cars are caught up in the jam

Dublin's rush hour, where public transport and cars are caught up in the jam 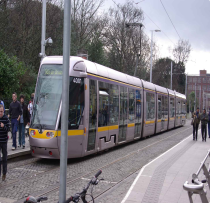 The Luas system has proved a hit with Dublin commuters.

The Luas system has proved a hit with Dublin commuters.

If traffic-related air pollution reaches dangerous levels in cities then short-term traffic restrictions can be used to reduce the problem. Air quality management plans would also have to be considered by local authorities.

Long term solutions include placing air quality issues into traffic management and planning procedures. Also in Ireland there needs to be a shift from private vehicles to a high-quality public transport service.

Quality Bus Corridor (QBC):  The introduction of quality bus corridors was a first step in making Dublin’s public transport service attractive for moving around the city. They give dedicated road space and traffic signal priority to the Dublin bus fleet. It is designed to make taking the bus more attractive, taking other vehicles off the roads and improving the city's overall air quality. BusConnects, the most recent core bus corridor project aims to deliver (230 kms of dedicated bus lanes and 200kms of cycle tracks along sixteen of the busiest corridors in Dublin (BusConnects, 2019). For further information on the project see here.

Luas: The Dublin Light Rail System is also a major initiative to get people out of there cars and onto public transport. The added bonus is that the Luas trams are powered by electricity. Figures indicate that 29.4 million passenger journeys were made in 2012, the highest ever level. The Luas cross-city project has recently linked both green and red Luas lines together. For further information on the project see here.

New Vehicle Label System: Vehicle Registration Tax (VRT) and annual motor tax for new cars registered on or after 1st July 2008 are now calculated on the basis of carbon dioxide (CO2) emissions from vehicles rather than engine size. Seven emission/tax bands have been created. The purpose of these changes is to encourage purchase of vehicles with lower CO2 emissions, an important step in reducing national greenhouse gas emissions and in meeting Ireland’s commitments for the purposes of the Kyoto Protocol. Additionally, petrol and diesel cars will be phased out after 2030 according to the latest Climate Action Plan 2019 and NCT certificates will not be issued for non- zero emission cars after 2045.

Transport 21: Projects such as Metro North and further Luas line construction were designed to help create a fully integrated public transport system for Dublin, thus reducing emissions and air pollution. Due to economic decline the Transport 21 project was cancelled in May 2011, but it has been superseded by the National Transport Authority's Integrated Implementation Plan 2013-2018. Published in 2014, the plan identifies four key areas for investment: