Of the thirty-five mammals present in Ireland the majority are based on land. The most common of these are the red fox, hedgehog, stoat, badger and otter. Others like the Irish hare and pine marten are plentiful but are seen less often. There are a number of native and introduced species in this group including the grey squirrel and bank vole. Several species of bat also live in Ireland along with only a few land reptiles. The three amphibians are the frog, the common newt and the natterjack toad.

For an overview of the specific distribution of animals in Ireland, a great resource is the Atlas of Mammals in Ireland that has been created by the National Biodiversity Data Centre. This atlas provides distribution maps of the wild mammals that occur in Ireland and its terrestrial waters.

The Irish Bank Vole is not a native Irish mammal, but rather an alien or introduced species. The first Irish sighting was in 1964.

Grey squirrels are not native to Ireland, but originally came from the forests of eastern North America. The Irish population originated from a single introduction in 1911, at Castle Forbes in Co. Longford.

An adult frog lives among the bog mosses. The tadpoles live in the bog pools where they feed on tiny aquatic insects. The presence of multicoloured Sphagnum moss is a sign of an actively growing blanket bog.

Over 400 bird species have been recorded in Ireland, although many are migratory. Arctic birds migrate here during the winter, while other birds like the swallow come here during the summer to breed.

Ireland has four species which have adapted to their Irish habitats and have now distinctly Irish characteristic features. These are the Coal Tit, Dipper, Jay and Red Grouse. Ireland is also a breeding habitat for species such as Storm Petrels. The Corncrake is one of the most famous endangered species in the country.

This resident bird is a seabird with long, narrow wings. Itm can plunge dive into the sea from up to 40 metres, folding its wings back to hit the water in a streamlined shape.

The population is declining, and the Red Grouse has made it onto the IUCN Red List. They are more affected - than other bird species - to changes in their landscapes. Other possible causes include; disease, fertilisers, predators, hunting and climate change.

The sparrow is a widespread garden bird with a lively "chirrup" sounds and a more grating "churrrr". 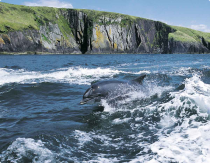 The Dingle Dolphin named Fungi, has become a firm favourite with locals and tourists. The young bottle-nosed dolphin has been around our shores since 1984.

The Dingle Dolphin named Fungi, has become a firm favourite with locals and tourists. The young bottle-nosed dolphin has been around our shores since 1984.

Our lakes, rivers and coastal waters are home to many fish species. There are also many marine mammals such as dolphins, whales, otters, seals and sea turtles off the western side of the island.