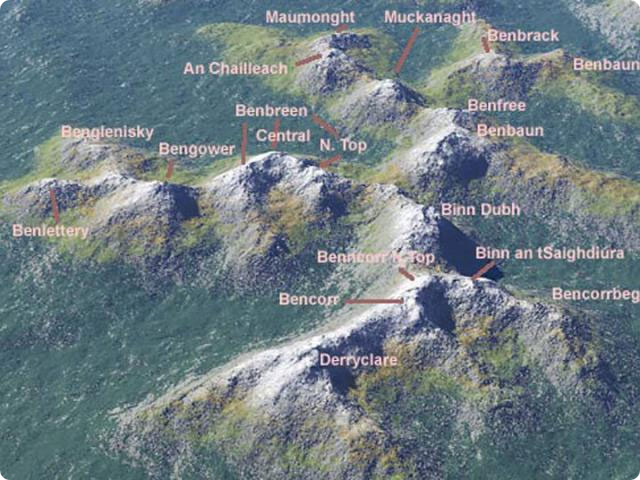 Possibly the best known mountain range in Galway is the Twelve Bens or Twelve Pins. This group of majestic mountains dominate the Connemara landscape and attract enthusiastic hill walkers from across the country. The mountain peaks are mainly quartzite, while much of the mountainsides are bare rock and scree.

The Twelve Bens are a relatively low mountain range. Benbaun is the highest at 2,395ft. This is a corruption of the Irish Binn Bhán ( White Peak ), a name given to the mountain due to its white appearance.

Other mountain ranges in Co. Galway include The Maamturks, overlooking Lough Inagh, and The Mweelrea Mountains, which rise from the northern shore of Killary Harbour. There are remarkable views of the Lough Corrib, Lough Mask and the scenic valleys of the surrounding countryside from a group of hills known as Joyce’s Country. These hills are named after a Welsh family that settled in the area in the 13th century.