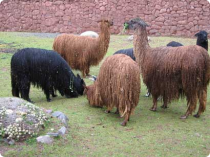 Llamas are native to South America

Llamas are native to South America

Glendeer Open Farm
Glendeer Open Farm is spread across six acres and is home to fifty different animal species, both native and exotic. The familiar rabbits, cows, donkeys, ducks and deers can be seen alongside more unusual animals such as emus, llamas, Vietnamese Pot Belly Pigs and Ostriches.

Roscommon Town Park
Roscommon Town Park extends over 14 acres and is bordered by the ruins of 13th century Norman Castle. The popular town park also features a crannˇg known as ‘Hill o’ Bones’, a wildflower meadow, a bird walk, and a lake.

Cycle Routes
Green Heartlands is a cycle route that traverses over 135 miles of countryside from Roscommon Town to Athlone. Cyclists can experience the tranquillity of a mixture of landscapes from farmland and bog, to forest, wetlands, rivers and lakes. This route can be split into stages and spread over a period of seven days (with an average of 19 miles per day), and encourages cyclists to appreciate the nature of the local area.

An Tßin is another popular cycle route in Roscommon. It starts at Rathcroghan and follows the route of Queen Maebh and her armies in the legendary Tßin Bˇ Cuailgne (Cattle Raid of Cooley) through the counties of Longford, Westmeath, Meath and Louth. The journey takes the cyclist by many heritage sites such as the Benedictine Abbey at Fore and one of Ireland’s earliest religious sites at Monasterboice. The journey ends at the Cooley Peninsula in north Co. Louth.