County Wexford is made up of many low-lying areas with the most part of Wexford lying below the 100m depth contour. The shortage of upland areas would suggest that the county would be less suitable for wind farm development than other parts of the country.

Nevertheless, effective wind strategies have been developed for the area and wind energy is currently being generated in a number of locations throughout the county. Wind farms in Wexford include Carnsore Wind Farm and Richfield Wind Farm, both located on the south-east coast, and Ballywater Wind Farm on the east coast.

Wexford currently has 17 windfarms generating a capacity of 178.86MW of electricity. The largest is Ballywater windfarm with a 31.50MW capacity. 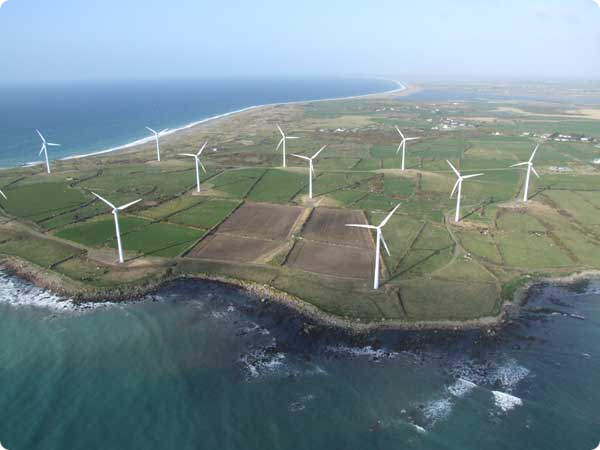 The Wind Farm developed at Carnsore Point was the first wind farm completed on the east coast of Ireland . It was constructed by Hibernian Wind Power Limited and opened in November 2002. Carnsore Wind Farm uses fourteen wind turbines which have the total capacity to generate a maximum of 11,900kW of renewable energy. These green energy supplies can power an average of 10,000 homes and save over 30,000 tonnes of CO2 annually.

Previous - Sloblands
Next - Features of Wexford