Journeys out of Ireland

Journeys Out of Ireland

Forms of Transport to get Abroad

For journeys out of Ireland, we can use air or sea transport. 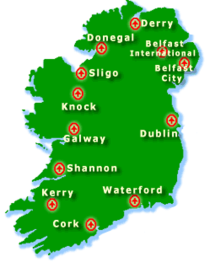 Air transport has become the fastest and most popular form of travel to other countries.

All of the above airports are served by flights from Britain, Europe, and the United States. There are several regional airports; Galway, Kerry, Sligo, Waterford and Donegal that have scheduled flights mostly to Ireland and the United Kingdom.

Fill in the Blanks!