Henry Ford's Quadricycle.
From the Collections of The Henry Ford.

The first form of road transport in Ireland was horses. With the advent of the Industrial Revolution, steam powered engines were created. These engines were too heavy to travel on roads. This led to the development of railroads.

About 100 years ago, the types of transport available were walking, horse-riding, trains and trams in cities.

Cars were developed around the 1900's. They progressed from wooden, steam, electicity charged vehicles to metal cars. In the early 1900's the car as we know it today began to be developed. Henry Ford was the first to assemble many cars in a factory and was the world's biggest car manufacturer by 1927. The Ford family came from Ballinascarty in County Cork.

What visual evidence do we have?

This photograph is of Bray train station in Co. Wicklow in 1952 when trains were the faster mode of transport. Your parents or grand parents may remember these trains.

This photograph is of Bray train station in Co. Wicklow in 1952 when trains were the faster mode of transport. Your parents or grand parents may remember these trains. 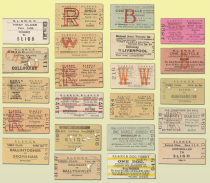 Here is a selection of train tickets issued by the Sligo, Leitrim & Northern Counties Railway from 1900 to 1957 showing some of the different destinations and the different types of tickets available to buy.

This photograph shows traffic scenes on O'Connell Street, Co. Dublin on 29th November 1964. It is evident from this that different vehicles were developed since the early 1900's such as buses. 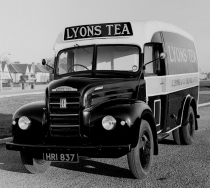 We discussed earlier the different forms of transport. For goods we can use a bigger vehicle like a truck or a van. In 1954, they also used vans to transport goods from one place to another. This photograph is of a Lyons Tea Van on 13th January 1954 making a daily delivery with their goods.

Learn about how Sylvia got to school