The first farmers also brought the first farms animals to Ireland. They brought animals such as cattle and sheep over seas on wooden crafts and canoes cut out of tree trunks. Farm animals were used to help farm the land. They were also eaten as food. 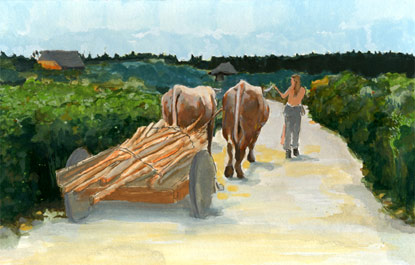 What are the oxen in this picture helping the farmer do?

Did you know that long ago in Ireland pigs were wild animals just like foxes and badgers?

When the first farmers came to Ireland they tamed the wild pigs. They became farm animals just like sheep and cattle.