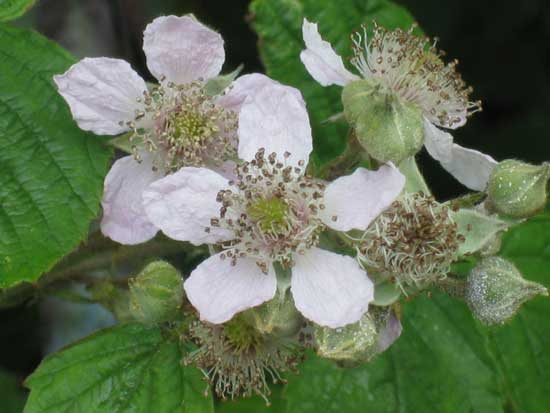 The flowers of the blackberry are a soft white-pink colour, which appear from June to September. They produce sweet nectar to attract bees, and they help to pollinate the plant. If you ever have honey from bees that have enjoyed blackberry nectar, you will notice that it is a darker colour and has quite a definite fruity taste.

The leaves of the blackberry bush are oval in shape and have very jagged edges. It is famous for invading people’s gardens, and because it puts down roots wherever it touches the ground, it can become a big problem to remove it.

Have you ever gone blackberry picking in the autumn?

They first appear as small, hard green berries early in the summer, and later turn red and eventually a deep purple-black colour. The sturdy stems of the bush becomes weighed down with these juicy berries that are dotted all over the bush in the autumn.

The sweet blackberry treats at the end of the summer are worth all the anticipation!

Have you ever mixed blackberry and apple to make a fruit crumble? Eaten with ice-cream, it’s one of the nicest summer desserts you could have.

Why not ask an adult to help you make it?