Raspberries are easily one of nature’s greatest fruits! The delicate, plump skin of raspberries is bursting with sharp, sweet flavour. They are packed with vitamins, minerals and anti-oxidants to help keep our bodies healthy. 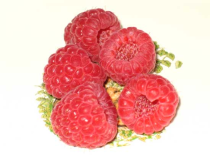 Raspberries grow naturally in Ireland now as they thrive in cool, moist climates, but are originally thought to have evolved from Eastern Asia. There are many different varieties of red, black and purple raspberries and they all flower either in summer or autumn.

Have you ever visited a fruit farm where raspberries are grown?

The bush is deciduous, with prickly, brambly stems, and each year there should be an abundance of luscious berries weighing them down! Usually the raspberry canes (this is what the shoots/trellises are called) are supported by posts and wires, and can grow to about two metres high.

Small, underground shoots called ‘suckers’ grow out from the main plant and develop into individual plants that have their own roots. If it’s planted in a small garden, it can quickly take over if it’s not trimmed back!

In late spring to early summer, very pretty whitish-green flowers of the raspberry bush come into bloom, and droop down in small clusters from the stems. These flowers are a major source of sweet nectar for the honeybees and other insects.

The raspberry fruit is a deep, plum colour, hollow in the middle and very soft and velvety to touch. When you’re picking raspberries, be careful not to grip them too tightly – they can be very easily squashed!

Raspberries can be a really special treat if you put them over cereal, or have them with ice-cream for dessert. They also make fantastic jam as they produce their own pectin.

Of course, there's no rule against enjoying them all on their own!