Did you know that even though rhubarb is eaten as a fruit, it is actually a vegetable?

The rhubarb plant was originally from Asia, although it is very widespread in Ireland now. It is a perennial plant, which means that it lives for more than two years. It has large triangular green leaves that look very much like cabbage leaves, and very small flowers that are greenish-white to red in colour. 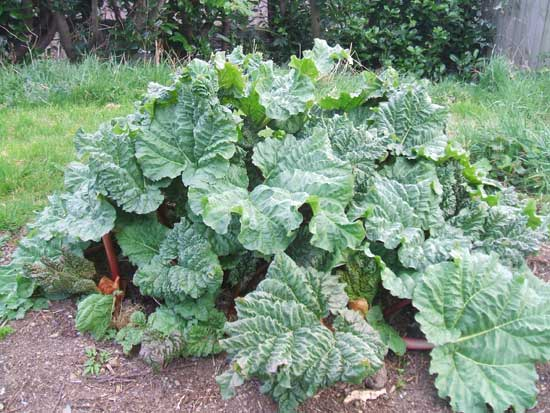 Can you see some of the red rhubarb stalks under all the thick leaves?

The stalks of the rhubarb plant are thick, firm and stumpy. The stalks are the part of the plant that is used to make the extremely popular summer dessert, stewed rhubarb.

Do you know how to make stewed rhubarb? Place some chopped stalks in a pot with a little water and sugar, and simmer until they go soft. Make sure to ask an adult to help you make it!

The rhubarb stalks that people use are usually a deep red or pink colour, but did you know that green stalks are just as nice? They are usually ready to pick in May/June. Just hold the stalk firmly close to the ground, then give a good tug to get it out!

The stalks may be nice and sweet but the leaves are highly toxic.

In the nineteenth century, rhubarb stalks dipped in sugar were eaten like sweets.

One of the most interesting facts about rhubarb is that to create a murmur for the background of a film, the extras are sometimes told to say the word ‘rhubarb’ repeatedly!