The yew tree is one of Ireland’s very few native evergreen trees, and one of the oldest trees growing in Northern Europe.

Can you remember what an evergreen tree is? Evergreens keep their leaves all year round, while deciduous trees shed their leaves in the autumn. 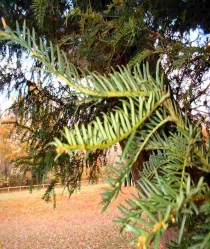 Photograph of the foiliage of a Yew taken in Woodstock Estate, Inistioge, County Kilkenny

Photograph of the foiliage of a Yew taken in Woodstock Estate, Inistioge, County Kilkenny

Have you ever seen a yew tree?

If you stand back and look at one from a distance, you’ll see that it is shaped like a big cone. If you go up close to the leaves, you will see that they are long and look like little needles. 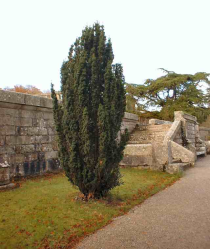 How old do you think a Yew tree could live?

Well, the oldest tree is Europe is believed to be a yew tree growing in a churchyard in Fortingall, Scotland. It is estimated to be about 2,000 years old!

Like the oak tree, the yew tree has also been used to name the areas where it grew. Did you know that Co. Mayo is named after the yew tree? The Irish name for Mayo is Maigh Eo, which means ‘Plain of the yew’.

Remember! All parts of the Yew tree, including the berries, are extremely poisonous if eaten.