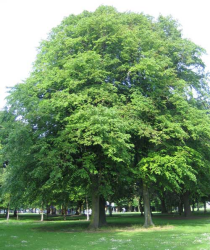 The Sycamore is a non-native, deciduous tree

The Sycamore is a non-native, deciduous tree

Some of our non-native trees have been growing in Ireland for over 1,000 years, for example the beech tree. However, despite the fact that they have been part of the Irish landscape for so long, they are still considered 'alien' species.

One way that helps some botanists to decide whether a tree is native to Ireland or not, is to look at the different place-names across the country. As trees were very sacred to our Celtic ancestors, many of the place-names in Ireland originated from species of trees.

For example, the Irish name for Derry, Doire, comes from the word for oak, dair. There is no place-name that comes from the Irish word for sycamore, seicmar. This supports the belief that it is not a native tree.

How did these trees start growing in Ireland?

This is a difficult question, and there is no definate answer. Trees such as the beech or horse chestnut have been growing in Ireland for so long that there is no way to know for sure how they were first introduced. Most likely, their seeds were transported here by animals or birds. Other trees were introduced by people, for example the Douglas-fir was first brought to Europe in 1827 by David Douglas.