The Douglas-fir is an evergreen coniferous tree. It is named after the Scottish botanist David Douglas, who first introduced it to Europe from North America in 1827. Despite its name, did you know that it's not a true fir tree? 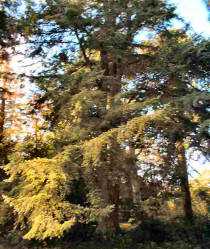 The cones of a Douglas-fir are very distinctive from true fir trees. They have papery scales, and between each scale is a small, brown, three-pointed leaf called a bract.

One Native American myth explains that each of these little three-pointed leaves is the tail and two back legs of a mouse. Mice are said to have hidden inside tree cones during forest fires.

As the Douglas-fir grows, the bark changes from a grey to a reddish colour, and it has very distinctive leaves that look just like a row of needles but don’t worry, they’re very soft to touch!

If you crush some leaves in the palm of your hand, you will get a lovely citrus smell. The cones break up when fully ripe, and all the small winged seeds are released.

Have you ever seen a Douglas-fir? Could you guess how tall they grow? Well, the tallest tree recorded in Ireland is a Douglas-fir. It is growing in Powerscourt, Co. Wicklow and measures fifty-six metres in height!

The wood from Douglas-firs is very tough. It is very popular for building garden furniture or boats, which have to face the Irish weather every day. The shoots of the Douglas-firs are also very popular with deer, which find them a very tasty food source!