The Legend of ManannŠn Mac Lir 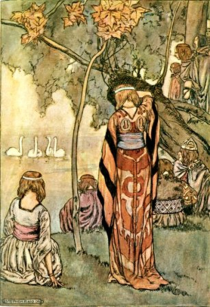 An illustration from the early 1900s of the Tuatha Dť Danann at the lake with the children of Lir, after they had been turned into swans by a spell. People came from near and far to hear the swans sing, because they loved the children of Lir.

An illustration from the early 1900s of the Tuatha Dť Danann at the lake with the children of Lir, after they had been turned into swans by a spell. People came from near and far to hear the swans sing, because they loved the children of Lir.

Enlarge image
ManannŠn Mac Lir was the legendary sea-god of the Tuatha Dť Danann. These were the people that lived in Ireland during the Bronze Age. He also appears in lots of the Scots and Manx ( Isle of Man ) mythology.

ManannŠn Mac Lir is said to have been the first ruler of the Isle of Man, and the Tuatha Dť Danann believed he had a great palace and throne there.

In fact, this is where he got his name, as ‘Manand’ is the Old Irish name for the Isle of Man. As his surname suggests, he was the son of Lir. Lir, meaning ‘sea’, was a great sea-god and it seems that ManannŠn eventually took over that role.

The Celtic people believed that ManannŠn was connected through mists with the other worlds, where the souls journeyed in the after-life. Emhain Ablach was one of the islands of the other world, and according to Irish tradition, ManannŠn ruled over it.

As a master of tricks and illusions, ManannŠn had many magical possessions. His horse, called Aonbarr, could gallop across the waves of the sea as if they were solid ground. He also had a ship called ‘wave sweeper’ that needed no oars or sails to travel. ManannŠn’s great cloak could change to any colour he wanted. He could shroud himself in mist and disappear from his enemy’s sight. It was with this magical cloak that he was able to protect the Isle of Man. 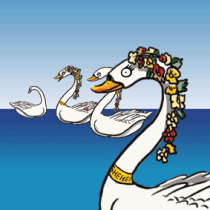 The children of Lir were turned into swans for 300 years.
Courtesy of An Post

One of his ManannŠn’s most powerful possessions was his sword. It was called Fragrach, or ‘answerer’. It was said that the very sight of Fragrach would fill men’s hearts with fear and weakness, and that any person wounded by it would not survive.

ManannŠn carried more of his possessions in his crane bag: language, birds, hounds and very magical pigs. Any pig that was slaughtered for eating would magically appear in his crane bag again the next day!

While ManannŠn Mac Lir was a great sea-god, his children had a very tragic fate. Their story is told in the myth of The Children of Lir.