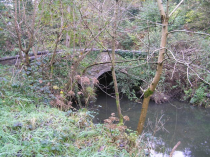 A photo of the Tolka Bridge, with surrounding vegetation, near Blanchardstown.

A photo of the Tolka Bridge, with surrounding vegetation, near Blanchardstown.

The name Blanchardstown comes from the Blanchard family, who were granted their estate some time between 1250 and 1260. The name 'Blanchard' is thought to come from the French word blanch, meaning white, and could refer to white or fair hair.

Much of present-day Blanchardstown was once covered by dense forest, which was known as the Great Scaldwood. The forest streched from the River Tolka to beyond Coolmine. It was home to wolves and wild boar, which were hunted by the local gentry. Following years of war and rebellion during which the number of hunters waned, the wolf population grew to such an extent that it posed a danger to local people and livestock. In 1652, the authorities ordered a wolf cull.

This is how Main Street, Blanchardstown, looked at the beginning of the twentieth century. St. Brigid's Cottages can be seen on the right.

This is how Main Street, Blanchardstown, looked at the beginning of the twentieth century. St. Brigid's Cottages can be seen on the right.

In 1662, the Hearth Money Act was passed by the Irish Parliament. Each house that possessed a fireplace or hearth was obliged to pay a tax of two shillings every year for each one. Official records contain the names of those who were liable for the tax in Blanchardstown. Amongst them was a Richard Dempsey who had to pay four shillings, as he had two fireplaces in his home.

The Parish Register for Blanchardstown goes back to the 1750's. This is a great record of the different families who lived in the area. From these records, we know which surnames were common in Blanchardstown over 250 years ago. Some common names were O'Brien, Mulligan, Corrigan, Sherlock, Powderly, Mahon, Horgan, Bronan, Dixon, Staunton, Halfpenny and Carpenter.