Terry Wogan is a much-loved television and radio presenter from Limerick City. He was born in 1938 as Michael Terence Wogan and spent the first fifteen years of life in Limerick City.

Wogan then moved to Dublin when his father was promoted in his job. After finishing school, he went to work in a bank where he stayed until RTÉ employed him as a newsreader and announcer five years later. 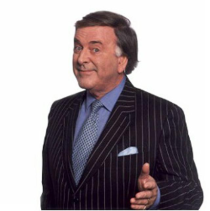 Terry Wogan is one of the most respected broadcasters working in Britain today.

Terry Wogan is one of the most respected broadcasters working in Britain today.

Having worked in RTÉ on documentaries and quiz shows, Wogan commuted from Dublin to London to do radio work for the BBC (British Broadcasting Corporation). He was eventually offered his own afternoon radio show in 1969 and by 1972 he took over the popular breakfast show on BBC Radio 2.

By 1984 though, Wogan decided to focus his career on television and stopped working on radio. By 1993, however, he was back to his first love of radio, when he resumed his morning slot on a show called 'Wake up with Wogan'.

Terry Wogan's television career took off in the 1980s. He worked on popular one-off programes such as the 'Children in Need' fundraising telethon and the Eurovision Song Contest.

His chat show called 'Wogan' was on three times a week and he has also hosted other programmes such as 'Blankety Blank', 'Come Dancing' and 'Points of View'. He presented so many programmes that by 1992, in a poll, he was voted both the most popular and the least popular person in Britain.

The British public grew tired of seeing his face and Prince Philip (Queen Elizabeth's husband) was reported to have said "that the difference between Terry Wogan and the M1 is that you can turn off the motorway".

Wogan still works on television today but it is his radio work that makes him so popular with his fans.

Despite spending most of his life in England, he never forgot the importance of his roots. As he says himself;  "Limerick never left me, whatever it is, my identity is Limerick."