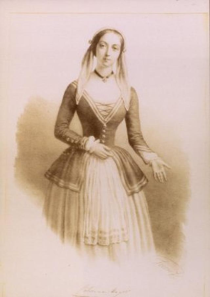 Catherine Hayes was an acclaimed opera singer who was born in Limerick City in 1818.

Her life as a child was one of poverty after her family had been abandoned by her father.

Her life was to change in 1838 when the Reverend Edmund Knox overheard Catherine singing. He was so impressed by what he heard that he, along with some other Limerick dignataries, arranged a fund for her to receive vocal and musical training. 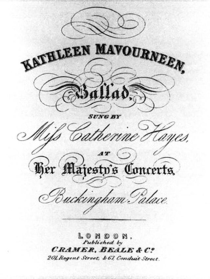 This poster tells of Catherine Hayes's performance in front of Queen Victoria and assorted guests at Buckingham Palace in 1849. This image is courtesy of courtesy of Basil Walsh (Florida), Author of, Catherine Hayes -The Hibernian Prima Donna.

This poster tells of Catherine Hayes's performance in front of Queen Victoria and assorted guests at Buckingham Palace in 1849. This image is courtesy of courtesy of Basil Walsh (Florida), Author of, Catherine Hayes -The Hibernian Prima Donna.

After various training in Dublin and Paris, Catherine moved to Milan in early 1844. By November 1845, she had become a great success and appeared in the famous opera house La Scala in Milan.

By 1850, Catherine was touring all over Europe as well as visiting America and Australia. The highlight of her career was possibly a performance at Buckingham Palace in London in front of Queen Victoria. The Queen was so impressed with Catherine's voice that she asked her to perform an encore. Catherine sang the Irish ballad 'Kathleen Mavourneen' to great acclaim.

After concerts in as far flung places such as Hawaii, Singapore and Calcutta, Catherine settled to a life in London in 1856. From there, she would travel between Britain and Ireland, performing concerts and making donations to various charities in her beloved Limerick and elsewhere.

She married her manager William Avery Bushnell in 1857 but sadly he died a year later. Catherine passed away from a stroke in August 1861.

Catherine is buried in London. Her home in Limerick, No. 4 Patrick Street is been converted by the Limerick Civil Trust into a museum to celebrate and record her many achievements.