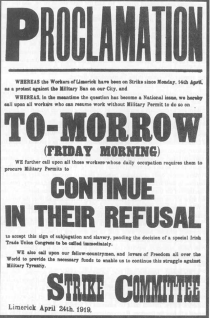 A poster proclaiming the decision to call a general strike of workers in Limerick in April of 1919.

A poster proclaiming the decision to call a general strike of workers in Limerick in April of 1919.

Martial law made life very difficult for the workers of Limerick. Representatives of all Limerick unions that made up the Limerick Trades and Labour Council gathered together to discuss the possibility of a general strike. After twelve hours of discussions the Council agreed to go ahead with a strike. Posters were printed and pasted all over the city.

Almost all workers in the city went on strike. Pubs and businesses remained closed. Hotels and restaurants were ordered by the strike comittee to close. Anyone in need of new clothing had to get a special permit from the committee to allow them to make a purchase.

Feeding the city's inhabitants was a big problem. The Council set up two committees - one to receive food and the other to distribute it. Permits were issued to allow food shops to open between 2 and 5 o'clock. The Council ordered bakers to return to work, but they could not deliver bread to shops or homes. Customers had to buy their bread directly from a baker.

The Limerick Strike Committee printed its own currency during the general strike in April 1919.

The Limerick Strike Committee printed its own currency during the general strike in April 1919.

After the first week of the strike, pay for the strikers became an issue. Not all of the unions would agree to providing strike pay and workers were running low on cash. The Council then took the unusual step of printing its own money. A list of shopkeepers who were willing to accept the money was drawn up. The notes were like vouchers, which could be redeemed by the shopkeepers at a later date.