A photograph, taken in the 1930s, of two people standing outside Templeogue Forge.

A photograph, taken in the 1930s, of two people standing outside Templeogue Forge.

The face of South Dublin has altered remarkably in the last hundred years, due mainly to massive increases in population and associated development. The majority of these changes have taken place in the last forty years.

This photo was taken in Tempelogue the the 1930s. Much of South Dublin has changed enormously since that time.

The major reason for the development of large areas of South Dublin was the Myles Wright Report of 1967. This report was carried out to find the best way to expand the city. It proposed that the housing needs of Dublin city should be solved by the development of three new towns to the west of Dublin around Tallaght, Clondalkin and Lucan in South County Dublin, and Blanchardstown on the Northside. 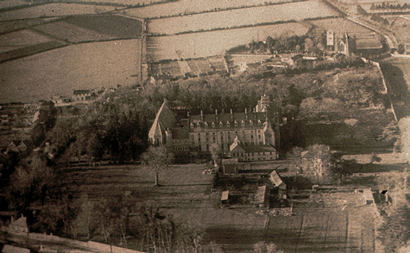 Aerial View of Tallaght in the 1930s

This photo shows what Tallaght looked like from the air in the 1930s. It is a country town. You can see that seventy years is a very long time in urban planning.