Ferns Castle, the political and royal centre of Leinster and Uí Chennselig for centuries. The fortress was stone built by the McMurrough ruling family and extended by Dermot McMurrough's grandaughter Isabella, married to William Marshal, early in the 13th century.

Ferns Castle, the political and royal centre of Leinster and Uí Chennselig for centuries. The fortress was stone built by the McMurrough ruling family and extended by Dermot McMurrough's grandaughter Isabella, married to William Marshal, early in the 13th century.

Ferns today is a quiet rural village situated in the centre of Co. Wexford with a population of just over 800 people. However, if one takes the time to explore the many monuments and historic ruins a fascinating story of times past quickly begins to emerge.

If you stop and linger the local people will soon tell you about how Ferns was once the capital of Ireland. Whatever about the truth of this widely-held belief, it is certain that Ferns was once at the centre of many of the major events in the history of Ireland. In the 6th century it was an ecclesiastical centre of national importance and subsequently the seat of the Kings of Leinster.

Its importance as an ecclesiastical centre dates from the time of St. Aidan who was a consecrated bishop in 598 and died in 625. The subsequent period was often less than peaceful. For example, it is known that Ferns was ravaged and burned several times in the 9th and 10th centuries by the Norwegian Vikings. 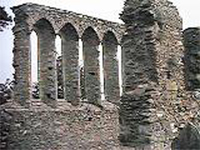 Perhaps the most famous association to which Ferns can lay claim is with the Norman invasion. Dermot McMurrough became King of Leinster in 1126 and had his castle at Ferns. These were turbulent times and rulers had the reputation of being cruel and ruthless. In this respect Dermot was no different and he is associated with massacres, burnings, raids and mutilation of rivals.

As a result of one of the many power struggles for supremacy which were prevalent at the time Dermot
invited the Normans to assist him in regaining his kingdom. Thus started a period of conquest and domination which was to last for 800 years.

In his favour it can be said that Dermot took a great interest in the reform of the Irish church through the introduction of Continental orders and practices. He founded a convent for Augustinian nuns in Dublin and a Cistercian Abbey in Baltinglass.

In 1158 he founded an Augustinian abbey at Ferns, the remains of which are still to be seen. It was here he died in 1171, and his grave is said to be marked by a broken cross shaft still clearly visible in Ferns old graveyard. 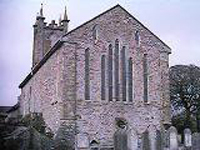 A cathedral was built here early in the 13th century, probably by John St. John, the first English bishop of Ferns (d. 1243). It stood within the bounds of the monastery founded by St. Aidan in the 6th century.

This large cruciform cathedral was burnt down by the O'Byrnes of Wicklow in 1575. They were ordered torebuild it in 1577, which they did to roughly the size it is today. In 1817 the cathedral was enlarged and the present tower and chapter house added.

Within the precinct are the remains of four plain High Crosses and a cross-carved granite slab. The original bases of the crosses have survived but the missing shafts have been replaced by ones of concrete. High Crosses are unique to Ireland and Britain. Those at Ferns probably date to the 8-9th centuries and may have been used to mark the boundaries or specific areas of the monastery.