Metalwork is one of the oldest crafts practiced in Ireland, dating back more than two thousand years. Functional metal items or tools were developed to help with daily activity, from hunting and cooking, to farming and self-defence. The earliest metal objects and artefacts discovered were made from copper, which was mined in Ireland around 2400 BC.

The next great breakthrough in metalwork came a few hundred years later, when craftsmen added tin to soft copper and an alloy was produced strong enough to make tools such as axes and cutting tools. This discovery heralded the Bronze Age.

Bronze was used extensively until the arrival of the Celts in Ireland around 500 BC. They brought Ireland into the Iron Age, with their advanced iron weaponry and accompanying tools.

It appears that gold was mined and worked in Ireland at roughly the same time as bronze (2200-600 BC). Very fine ornamental gold pieces have been found, indicating that their producers were not simply farming people, but also sophisticated artisans, creating things of great beauty and complexity. Silver production and use in Ireland can also be dated from this period. Gold and silver, being precious metals, have been mainly used to produce ornamental objects.

The development of metalwork in Ireland has gone hand-in-hand with its agrarian traditions. Metal workers primarily produced tools and weapons such as axes, knives and in later centuries, more complex items for agricultural or domestic use, such as cauldrons. 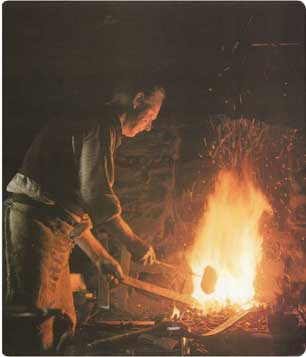 John Maloney, a third generation blacksmith from County Clare heats the iron so it can be beaten into shape.
Copyright David Shaw-Smith