Dáil Éireann proclaimed itself to be a legitimate government; the British government denied such a construction of reality, and sought to end it. See film footage of the British Government Veto and its Aftermath in Ireland. In 1919 at Soloheadbeg in Tipperary the first attack on British forces occurred, and for the following two years a military struggle took place, to the unease of figures like De Valera

who called for pitched battles or a ‘clean fight’. The fight was a guerrilla war, mainly lead on the nationalist side by Michael Collins

Michael Collins took part in the Easter Rising of 1916 and was later appointed Minister for Finance. He was part of the delegation that negotiated the Anglo-Irish Treaty in 1921, the terms of which led to the Irish Civil War in 1922. Collins became the commander-in-chief of the Government forces. He was killed in Cork on August 22 1922.

, with the Royal Irish Constabulary represented as the prime upholders of British rule in Ireland . 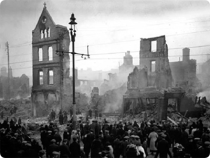 Image of Sunner's Chemists after the Burning of Cork during the War of Independence.

Image of Sunner's Chemists after the Burning of Cork during the War of Independence.

The British army were internationally stretched and so backed up the RIC in Ireland by recently demobilised first world war soldiers known as the Black and Tans and by an officer class known as the ‘Auxiliaries’ . Unsuited to operate among a civilian population they were popularly represented as ‘running amok’, which to a degree they did. Midnight searches for arms, curfews, areas proclaimed under the Defence of the Realm Act were all used to defeat the IRA campaign. Ostensibly controlled from the centre, in actuality the Volunteer movement was primarily local, and though Collins controlled Dublin , infiltrated the central intelligence units at Dublin Castle , and ran his so- called Squad of hand -picked assassins in Dublin, much of the war operated outside of any central control. The shooting of ‘G’ men or new replacement   British intelligence officers by Collins’s Squad , was avenged by indiscriminate British Army shooting into the team and a large crowd at a match in the GAA grounds at Jones’s Road in Dublin. See film footage of this 'Bloody Sunday' (as it became known) and its aftermath. Attacks on soldiers were avenged by the burnings of towns like Balbriggan and Cork , and the alienation of the civilian population. Belfast became a locus of persecution for Northern Catholics and lead to the Dáil introduction of the Belfast Boycott. See film footage of the Intimidation of Catholics in Belfast.

Ignoring political developments in Ireland, and viewing it primarily in military terms, the British government divided Ireland in the Government of Ireland Act 1920, declaring the existence of two separate jurisdictions with devolved administrations, Northern and Southern Ireland, both subordinate to Westminster and both within the Empire and under the King. Due to the Sinn Fein boycott of Westminster, and due to the imprisonment, absence, or hiding of nationalist leaders the settlement of 1920 was put in place by a British cabinet committee, without any nationalist input. Elections were held for what were to be two new Irish parliaments.

The IRA continued to fight  and in May 1921 set fire to the Custom House in Dublin, thereby destroying large quantities of public local government records. The fire burned for days and the building was very badly damaged. See film footage of the Custom House Fire.

On 22 June 1921 at the opening of the Northern Ireland parliament the king, George V appealed for conciliation. See film footage of King George V arriving in Belfast. A truce was called on 11 July 1921. See film footage of the Signing of the Truce. Lloyd George, who had said that he would never negotiate with ‘murderers, thugs and gunmen’ proposed talks. Despite absence of agreement on almost all key terms an Irish negotiating committee went to London in November 1921 lead by Collins and Arthur Griffith

Griffith joined the Irish Volunteers in 1912. Although not involved in the 1916 Rising, he was imprisoned with those who fought, due to the government's perception that his writings encouraged nationalist fervour. He was part of the first Dáil in 1919 and was elected vice-president of the republic. After the truce in the War of Independence in July 1921, Griffith lead the Irish delegation in London. This resulted in the Anglo-Irish Treaty of 6 December 1921. He died of a brain haemorrhage in Dublin on 12 August 1922.

. Negotiators or plenipotentiaries, their status was ambiguous and many were uneasily at De Valera’s absence from negotiations. The republic was utterly unacceptable to Lloyd George and his team and there was no willingness on the British side for anything beyond dominion status within the empire. This was considerably more that Home Rule, but very far away from the Republic, according to republican rhetoric already established in arms.

The Government of Ireland Act’s terms were superseded by the Treaty of December of 1921 though in a curious legal anomaly it remained legally present. The negotiators had been told by De Valera to break off the talks, if they had to be broken off, on the question of partition and opposition to it. The Treaty, however, provided for the opting out of Ireland of Ulster counties within a year of the signing of the Treaty with the proviso that the boundaries of the exempted areas could be revised subject to the decision of a Boundary Commission. See film footage of the Signing of the Anglo-Irish Treaty.

Collins and Griffith chose to believe that this would result in plebiscites in the north that would at the least mean that Tyrone and Fermanagh, with nationalist majorities, would be ‘returned’. Such was not to be the case.

In January 1922 on behalf of the Irish Free State, Michael Collins arrived at Dublin Castle to receive the handover of the castle from Lord Lieutenant FitzAlan. See film footage of the Handover of Dublin Castle. 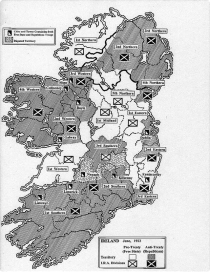 This maps shows the dividing beliefs that were pro-treaty and anti-treaty that allowed the civil war to break out in Ireland in June 1922. The war ended in May 1923.

This maps shows the dividing beliefs that were pro-treaty and anti-treaty that allowed the civil war to break out in Ireland in June 1922. The war ended in May 1923.

The seeds of civil war were sown by De Valera’s rejection of the Treaty, which gave form to the opposition of non-compromising republicans and others. For those activists who had fought with Collins, a Treaty good enough for him was good enough for them. In informed circles it was also recognised that the indefinite pursuit of a war against so great a power was impossible, and the mantra of the Treatyites became ‘the freedom to achieve freedom’. See film footage of the pro-Treaty Dáil Cabinet led by Arthur Griffith and the anti-Treaty element led by De Valera. The Dáil split, the Volunteers split, Sinn Fein split and the country split. See film footage of De Valera and Supporters on Walking out of the Dáil Chamber. Though Collins and De Valera tried to avert war through the so-called pact elections, as Republicans occupied buildings in Dublin, Winston Churchill made it plain that either the Treatyites restored order and defeated the republicans, now known as the Irregulars, or the British would reclaim the country. The Four Courts was one such building which was occupied by the Irregulars, led by Rory O'Connor

Rory O'Connor fought in the Easter Rising in 1916 and later became Director of Engineering in IRA. He opposed the Anglo-Irish Treaty of 1921 and was executed on 8 December 1922 in retaliation for the killing of the pro-treaty TD, Sean Hales.

and it was attacked by the Treatyites, or 'Free Staters'. The battle lasted for over two days before the Republicans finally surrendered and with the Four Courts gutted, the fighting spread to other areas. See film footage of the 'Battle' of the Four Courts.
In this context, a bloody civil war was fought. See film footage of Civil War Destruction. Michael Collins was one of the first to die in this, killed in an ambush in County Cork. Shortly before Collins’s death in August 1922, Arthur Griffith had died, at least partly from stress, anxiety and horror. See film footage of the Funerals of Arthur Griffith and Michael Collins. The Catholic Church backed the government of William T. Cosgrave, who now replaced Collins and Griffith. The key figures in this first Cumann na nGaedheal cabinet were Cosgrave, Kevin O’ Higgins

O'Higgins joined the Irish Volunteers in 1915 and supported the signing of the Anglo-Irish Treaty in 1921. He became Minister for Home Affairs in 1922 and established the Garda Síochána in 1923. O'Higgins was shot on 10 July 1927 by members of the IRA.

, and in relation to policy on ‘the North’, Ernest Blythe. See film footage of Cosgrave, O'Higgins and Rory O'Connor. The majority electorally supported the Treaty, as did most of the establishment forces in the country.

The civil war legacy was bitter. Each side had excoriated the other; members of the new Seanad Éireann, disproportionately protestant, and in some cases protestant unionist, had been targeted by the anti-Treatyites- many of their big houses were burnt for reasons more sectarian than political. The execution of seventy seven republicans by the Free State government was not forgotten by Republicans and nor were Free State atrocities like Ballyneety in Kerry where some of the bitterest civil war battles were fought. The new government believed that they had saved the first ever partially-independent Irish state and that the republicans had wrecked its future by destroying its infrastructure and imposing an unnecessary war upon it. Real hatred marked these civil war divisions and at its end thousands of republicans remained interned in the Curragh, determined never to recognise the Free State, its Dáil or its Seanad.