Second World War and its aftermath

The decision to pursue  a policy of neutrality was governed by public inclination, prepared through political rhetoric, and the conviction of the Fianna Fail cabinet that the new state might never re-emerge in independent form if it joined Britain again in the Allied war effort. Reinforcing this fear of reabsorption into the British state, was the conviction that internal threats from the defeated IRA could render maintaining national unity alongside of a policy of supporting the Allies difficult if not impossible.

Irish neutrality  was a source of considerable anger on the part of both Britain and the USA , as Ireland’s strategic importance for North Atlantic supply routes was vital. Winston Churchill who had played a significant role at the time of the establishment of the Free State was enraged by the policy; in 1941 he went so far as to attempt to suggest an exchange of Irish support for the Allies with an offer to support for the ending of partition. De Valera rejected this offer, calculating that the pledge would prove unredeemable at the end of the war.

Although neutral, Ireland did not escape the bombing in the war entirely. On the 1st of June 1941, 4 German bombs were dropped on Dublin's North Strand area, killing 38 people and injuring a further 90. See film footage of the North Strand Bombing.

Northern Ireland, still a part of British territory, provided bases that the southern state denied, and in the process consolidated its position within the United Kingdom. The release of formerly secret documents over the past decades has revealed that Irish neutrality was pro-Allied in practice, though a scrupulous adherence to the forms did not indicate that at the time.

IRA men were detained in large numbers in the Curragh and some died on at the hands of the state or through hunger strikes; their detention was to prevent their putative and actual liaison with German forces, who periodically tried to establish Irish links.

The war experience cut Ireland off from the mainstream of European life in these terrible years, but also served to consolidate Irish statehood. Censorship, rationing, an unwillingness to accept Jewish refugees with significant exceptions like the mathematician Edwin Schroeninger, meant increased insularity and self-reliance, but also consolidated statehood and a sense of shared identity.

Richard Mulcahy fought in the 1916 Rising and was elected Minister for Defence in the 1918 election. Mulcahy supported the Anglo-Irish Treaty in 1921 and later served as leader of Fine Gael. He was also Minister for Education from 1948 until 1951.

played a leading role in bringing a number of parties together and the first Inter-Party Government was elected as De Valera’s government lost power in the 1948 election. Neither NATO nor the UN was interested in Irish membership, and the record of war-time neutrality undermined the state’s position internationally. For the first time since 1932 Fianna Fail were not in power and the interparty government composed of Fine Gael, Labour, Independents and the newly founded republican Clann na Poblachta declared a Republic in 1948.

The British welfare state was extended to Northern Ireland, highlighting northern post-war prosperity against southern decline. Brookeborough as northern leader pressurised the British government in the wake of the declaration of the Republic, and in recognition of Northern Ireland’s war effort the Attlee government in 1949 passed the Ireland Act, further underwriting its commitment to the maintenance of the state of Northern Ireland. Sean MacBride at External Affairs pursued an anti-partition policy and DeValera in opposition did likewise.

Before the interparty government fell on the Mother and Child scheme they had initiated some moves to address the serious economic position of the new Republic, but not until De Valera stood down for his successor Sean Lemass did a new economic policy become publicly visible.

Protectionism had been the policy of Fianna Fail since its inception, building on pre-independence ideas of national self-sufficiency in an unindustrialised society. A series of policies had sought, since the early 1930s, to construct indigenous industries behind protective walls. Over time the policy became less doctrinaire and more instrumentalist, resulting in the construction of a range of semi-state bodies to do what private investment did not, and shielding a native class of moderately uneconomic industrial producers.

High emigration in the 1950s and economic stagnation charted a new public policy of abandoning protectionism and stabilising relations with the UK and Northern Ireland in preparation for joining Britain in a bid to enter the European Community. The decade did provide advancements on some fronts though, with the first transatlantic flight made by the Irish national airline, Aer Lingus, in 1958. This inaugural flight flew from Dublin via Shannon to New York. See film footage of the first Aer Lingus transatlantic flight.

The 1960s saw all the major parties, Fianna Fail, Fine Gael and Labour seeking new social and economic visions. The commemoration of the 1916 Rising in 1966 was designed by the state to indicate that the task of a new generation was to secure Ireland’s economic future. Foreign investment was pursued through the Industrial Development Authority, and for the first time since the famine there was virtually no emigration. Taoiseach Sean Lemass implemented a programme for economic expansion - the first of its kind in Ireland. The aim of the plan was to reduce Ireland's dependency on industries that needed to be protected from foreign competition by use of tarrifs, to attract foreign investment into Ireland and to increase agricultural output. In 1965, Lemass signed the Anglo-Irish Free Trade Agreement with British Prime Minister Harold Wilson, removing tarrifs on both sides in relation to import of goods and including a guarantee of a greater share of the British market for Irish farm products. See film footage of the signing of the Anglo-Irish Free Trade Agreement.

A programme of building was also set up including house building with new housing estates being created to re-locate people from inner-city slums and to accommodate an increasing population.  See film footage of re-housing in Dublin .

The 1960s also saw the arrival of a number of world-renowned visitors from various spheres. In 1963, the President of the United States, John F. Kennedy came to pay a visit to the land of his ancestors, a few months before his assassination. See film footage of President Kennedy's visit to Ireland. Later in the same year, the Beatles came to play in the Adelphi Theatre in Dublin, drawing a large crowd of fans and onlookers. See film footage of the Beatles playing in Dublin. 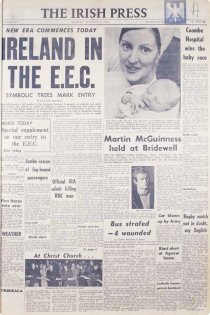 
In 1973 this path was confirmed by Ireland’s accession to the European Economic Community with Great Britain on foot of a Referendum held the previous year. Relations with Northern Ireland seemed better than at any time in the past when Sean Lemass resigned to be succeeded by Jack Lynch in 1966. See film footage of Jack Lynch and his wife Maureen voting in the Common Market referendum in 1972 .


View the image in pdf

Lemass apparently succeeded in his modernising project in the fairly consensual Republic but Terence O’ Neill the Prime Minister of Northern Ireland was less successful. His modernisation project fell foul of fundamentalist elements within Unionism and the demands of the Northern Ireland Civil Rights Association for British rights for British citizens. As the politicisation of northern nationalist grievances through the civil rights movement heightened tensions in a deeply divided society, O’Neill proved unable to balance the demands of the British government for immediate concessions with the resistance of his own grass-roots, egged on by the Rev Ian Paisley. The civil disobedience of the civil rights movement imploded in the face of the sectarianism rampant in the society, and civil order broke down resulting in the introduction of the British Army onto the streets of Northern Ireland, to protect Northern nationalists then under attack particularly in Belfast.

The northern troubles cannot be gone into in detail here but the collapse of civil order in the north fundamentally affected the Republic and presented it with its greatest crisis. See film footage of the Riots in Derry in 1969 at the Apprentice Boys March. Decades of rhetoric about the scar of partition were now called to account, and Fianna Fail in particular almost imploded under the pressure. What was the reaction of the Republic to be in this situation? Through the Arms Trial, Fianna Fail under Jack Lynch answered the question by saying that the southern government would refrain from lending armed support to those nationalists in Northern Ireland then establishing the Provisional IRA.

The next decades saw the policies of the coalition governments of Fine Gael and Labour under Liam Cosgrave and Garret FitzGerald partner Britain in managing the Northern conflict. A succession of initiatives, from Sunningdale  in 1973 through the New Ireland Forum and the Anglo Irish Agreement of 1984 indicated the desires of both governments to stabilise the North while protecting northern nationalists and respecting the rights of Ulster Unionists. See film footage of the 1973 Sunningdale Agreement and of the 1985 Hillsborough Agreement.

The Good Friday Agreement of 1998 represents the pinnacle of that joint policy in mutually agreeing equal rights and identities for all in Northern Ireland. Economic growth in the years of the Celtic Tiger transformed the economic condition of the Republic.