The Tudors, the Reformation and the Start of Plantation

The Tudor period began the process that changed the structures of power in Ireland through conquest, a process consolidated and finalised by the plantations and wars of the seventeenth century that reached their apotheosis in the battle of the Boyne in 1690.  Under Henry VIII, the English state moved to turn the English rule of the Pale and nominal\English control, through the great Irish Norman lordships of Kildare and Ormond, into an actuality. Policies like Surrender and Regrant recast the meaning of Gaelic lordships, and incorporated them into the feudalism of the English legal system whereby land was held 'of the king’ and could in turn be seized by him in the event of rebellion. 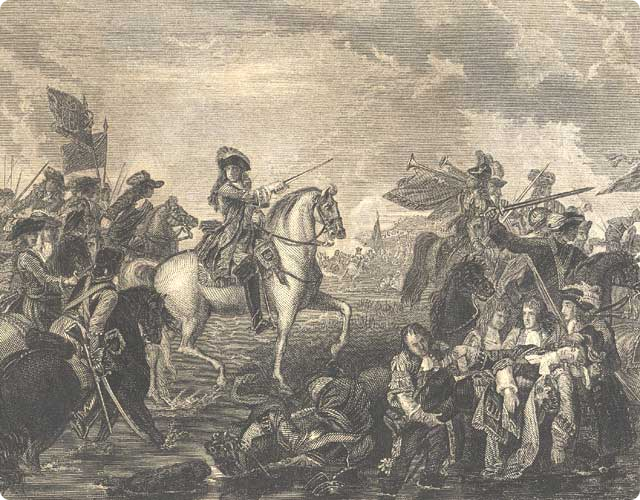 Battle of the Boyne

Tudor conquest coincided with the Reformation, thus ensuring that the conquest and the attempt to impose the new religion were experienced as two sides of the same coin. This conjoining was to have fateful consequences for the future of Irish society and laid down the lines for Ireland’s long and gruelling engagement with England’s relentless growth and colonial development. The immediate consequences of a reformation, initially lightly imposed, tested the loyalties of the original colony in Ireland , the majority of whom held on to the old religion; in so doing they were cast by successive English rulers in Ireland as having become one with the ‘mere Irish’ Gaelic nation. Constantly repositioning themselves the eventual fate of the Old English colony was to be consigned by the new order 'with the despised native Irish', an English shorthand for the rich and complex amalgam that was the native polity. The foundational text of their constitution as the Irish nation was Geoffrey Keating’s seminal Irish language history Foras Feasa ar Eirinn that presented them as one people.

Vicious 'wars of extirpation' were accompanied by a series of historiographical justifications of conquest  on the grounds of the alleged barbarity of the native population. Edmund Spenser was typical of those who made fortunes from land confiscated from the rebellious. Huge new estates arose on the sites of the old proprietors’ lands, and Munster was laid waste before being systematically ‘planted’ with a new population. As in England , monasteries and churches were seized by the state and new private fortunes were made.