First Christmas at the Workhouse 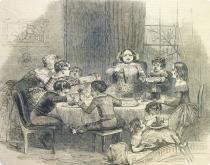 Illustration of a typical Victorian Christmas dinner. This picture is taken from the Illustrated London News 1849.

Illustration of a typical Victorian Christmas dinner. This picture is taken from the Illustrated London News 1849.

The paper reports that about two hundred inmates were supplied with "a comfortable dinner of roast beef of excellent quality" on Christmas Day.

An almost Dickensian glow pervaded telling of the tale. Large fires "blazed in the hall" and the women and children were described as being of "comfortable appearance" as they sat down to dinner that day.

In the Sentinel's opinion the scene afforded "ample proof of the benefits conferred on the poor since the house opened for their reception".

They reported also that the workhouse was "admirably conducted" and under the "vigilant superintendence" of the Guardians.