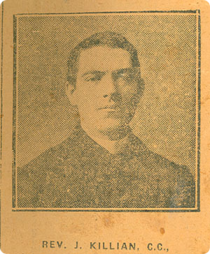 Rev. Fr. J. Killian was organiser of the All-Ireland Feis, which opened at Tullow, County Carlow 1913.

Rev. Fr. J. Killian was organiser of the All-Ireland Feis, which opened at Tullow, County Carlow 1913.

The Chairman of the Board of Health, the Rev. Fr. Killian played a key role in trying to achieve reasonable accommodation for the poor patients during the next six months.

There was a question mark over why the military (about 200 men) should require a commodious building such as the Workhouse which was described a "the usual straggling establishment".

The Old Barracks was a compact three-storied building having troop stables on the ground floor. It had been maintained by the British Military up to the date of transfer in a state of good structural repair.

The Department of Defence thought that the existing patients housed in the County Home, which had once been the Workhouse, could be transferred to Athy or Thomastown, both locations outside the County of Carlow.

The Carlow Board of Health supported by local feeling felt there should be a hospital in Carlow, the capital of the county and "there is strong local objection to removing inmates to Athy (12 miles) or Thomastown (23 miles). Fear was expressed that some patients would die on the journey. The question of the sick poor of the county having to journey considerable distances in future was also a factor in increasing local opposition.