Role of the Boards of Guardians 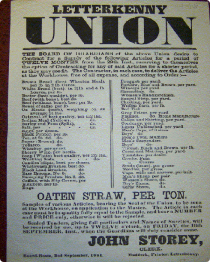 Notice issued by Letterkenny Board of Guardians stating that tenders are sought for the supply of goods such as bread and meat to Letterkenny Union Workhouse. Signed by Union Clerk, John Storey.

Notice issued by Letterkenny Board of Guardians stating that tenders are sought for the supply of goods such as bread and meat to Letterkenny Union Workhouse. Signed by Union Clerk, John Storey.

At the onset the boards of guardians were given only limited responsibilities. The poor law commissioners believed that the boards had no significant role until the workhouses opened and restricted their expenditure to Ł400. They ignored the fact that the boards were responsible for overseeing the valuation of the union, which would ultimately decide the rate paid by the people of the union, and from this the amount of money available in the union to pay for relief. The boards were also expected to supervise the building of the workhouse, hold interviews for the officers of the union and the workhouse, make decisions on tenders for furnishings and food supplies for the workhouse and on a local level smooth the introduction of the poor law and make it as acceptable as possible to the local population.

After the election of the main officers of the board the first order of business for Milford Board of Guardians was the fixing of the salary of union clerk, which was set at Ł30 per annum. As a number of people had expressed an interest in the position it was decided that each would be called in separately and examined, the outcome of which was the appointment of John Crosbie as clerk of the union in late September. The treasurers of the unions were usually one of the banks in the vicinity and Milford guardians elected the Belfast Banking Company (Letterkenny Branch) as treasurers, provided that they would allow 3% on all deposits and that there would be no charge up to Ł200 on their overdrawn account, these being the same terms extended to Letterkenny Union.

Right: Notice from Letterkenny Union requesting that tenders be entered to the Clerk from people willing to supply the articles listed to the workhouse. The guardians would then look at the tenders during their meeting and decide on the successful suppliers. Similar notices would have been printed for Milford but none of these survive.

Previous - The Board of Guardians
Next - Building Milford Workhouse