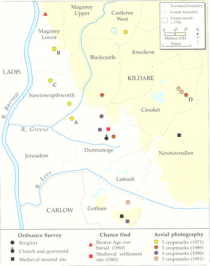 As the great ‘Atlas of the Irish rural landscape’ (1997) demonstrates, a man-made pattern of fields or enclosures covers much of lowland Ireland. The type, size, shape and origin of these enclosures can vary considerably from place to place.

Large, regular-shaped fields bounded by thorn hedges prevail across much of the good agricultural land of east Leinster. In places, for example in the tillage lands around Athy in south Kildare, such fields reach over 40 hectares in size. In great contrast are the large, limestone-walled fields of east Galway, and the small (frequently under 0.2 hectares), irregularly-shaped, walled fields of the Aran Islands and parts of Connemara. Yet another type is associated with the 'ladder farms' created in parts of the west during the later 19th century to replace an older communal type of farming ('rundale', sometimes referred to as 'infield-outfield') based on clustered housing (the so-called 'clachan') and open fields. Each ladder farm was a long strip which might run from low to higher ground and so cut across sections of better and poorer land. Field boundaries were the 'rungs' of the ladder. In this way, a 'striping' of the landscape was achied, radically changing the older, more open, pre-Famine scene.

Some field boundaries may be of great age. At Cťide Fields, near Belderg in Co. Mayo, an extensive field system with stone boundary walls is now buried beneath blanket bog, and can be related to Neolithic farming during the fourth millennium B.C. In contrast, much of the modern field pattern covering eastern Ireland has its origins in the late medieval and early modern periods, roughly from the 16th to the 18th centuries. South of Maynooth in Co. Kildare, for example, the landscape was enclosed and divided with quickset thorn hedges during the late seventeenth century. Further south, between Castledermot and Baltinglass, the process was more piecemeal, the great sheepwalks of the mid-1700s having been broken up into dozens of small fields by the 1830s. A few kilometres to the west, around Maganey in the Barrow valley, aerial photography has demonstrated that the modern large field system is superimposed across the outlines of much older, smaller enclosures. Across Ireland, aerial photography and geophysical surveys have revealed the existence of long-abandoned enclosures and of early settlement sites.

The enclosure pattern continues to alter during the present century. Two of the most significant trends of recent times have been the removal of hedges to create larger fields, and the wire-fencing † of upland areas to assert ownership rights and to allow for livestock management. A consequence of the former is a reduction in wildlife habitats, a consequence of the latter is a reduction in options for hill-walking.