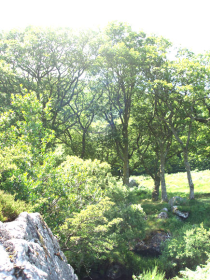 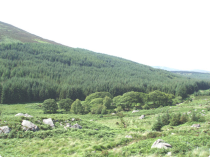 The extent of woodland in Ireland has changed greatly over the centuries. Exactly when, and for what reasons, the main reduction in woodland occurred is the subject of ongoing debate. It is generally accepted that by about 1700 less than 2% of the island was woodland. Poems such as ‘Cill Cais’, with its lament

‘Cad a dhťanfaimid feasta gan adhmad?
TŠ deireadh na gcoillte ar lŠr
[‘Now what will we do for timber,
with the last of the woods laid low…’ Tr. Thomas Kinsella]

These poems represent a perception that much woodland was lost during the social and settlement convulsions of the seventeenth century.

The woodland cover was probably at its lowest about 1900. Since then an increasing volume of state and, more recently, private planting has expanded the woodland area to about 9-10% of the total land area of Ireland.

Much recent afforestation has been on marginal agricultural land and on hillsides. The cumulative effect of the forestry programme has been to produce significant alterations to some landscapes. A strong case can be made that forestry represents valuable biomass and contributes to reducing global climate change. But the scenic impact of extensive stands of coniferous plantation across formerly open land is much more open to debate. †