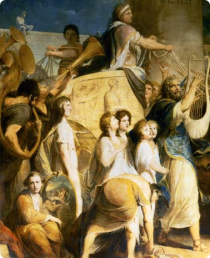 Crowning of the Victors at Olympia

Crowning of the Victors at Olympia with Barry as Timanthes

Crowning of the Victors at Olympia

Crowning of the Victors at Olympia with Barry as Timanthes 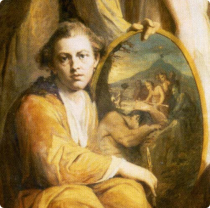 Detail from 'Crowning the Victors at Olympia'

Detail from 'Crowning the Victors at Olympia' showing Barry as Timanthes

Detail from 'Crowning the Victors at Olympia'

Detail from 'Crowning the Victors at Olympia' showing Barry as Timanthes

In 1773 Barry became involved in a project to decorate St Paul's Cathedral, but the project came to nothing. As a result of the St Paul's endeavour, the Royal Society of Arts approached ten artists with a project to decorate the Great Room of the Society's building designed by Robert Adam. All the artists turned down the project, but James Barry offered to decorate the Great Room with a series of six giant paintings. The subject of these paintings was the progress of human knowledge, from the barbarous, pre-Classical beginnings of mankind to the final judgement, or retribution.

Barry created a prodigious narrative of human culture. The first three paintings, Orpheus reclaiming Mankind from a Savage State, The Grecian Harvest-Home and Crowning the Victors at Olympia, are Barry's narrative of Greek civilisation while the next two paintings, The Triumph of the Thames, that included Sir Francis Drake, Sir Walter Raleigh, Captain Cook, and the musical Dr Charles Burney boating in a pond while surrounded by naked nymphs, and The Distribution of Premiums by the Society of Arts that celebrates English commerce and artistic civilisation. The final canvas Elysium and Tartarus is a very personal James Barry heaven and hell where Classical references fuse with Christian teachings of redemption and retribution.

These paintings are the most technically and intellectually ambitious works of Art ever produced in England. They are both a key and an answer to all of the challenges raised against English art by the superior history painters of Italy and France. They are Barry's practical defence of the British imagination against the arguments put forward in Abbé Winklemann's An enquiry into the real or imaginary obstacles to the arts in England. With these canvases English Art ceased to be the work of tradesmen, of mere craft, but became unified with the spirit of poetry and an expression of the complex, educated mind.

When Barry's decorations, profound works of art, were shown to the public it was clear that he had achieved a great personal and artistic triumph. Samuel Johnson was astonished by them and Lord Aldborough wrote to Barry offering to share his personal fortune with the artist. The Royal Academy elected him as its Professor of Painting. This last honour would be the undoing of Barry as he was still working at the Royal Society's Great Room and had an argument with Sir Joshua Reynolds about lack of preparation for his R.A. lectures. As well as the ill-feeling with Reynolds, this work of nearly seven years brought only Ł500 to Barry, the proceeds of its two subsequent exhibitions in 1783 and 1784.