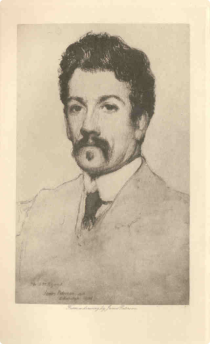 John Millington Synge was born in 1871 in a substanial house in Rathfarnham , close to the Dublin mountains. His family came from a long line of Church of Ireland dignitaries, and were also of the ascendancy class but without any great wealth. He had very strong links with County Wicklow as his grandparents and other relatives had lived there over a long period of time. Synge spent the summer months in Greystones. His mother moved the entire household to lodgings in the quiet fishing village as its closeness to their relatives in Glanmore Castle suited them. From 1890 the family spent their summers in other locations, notably in Castle Kevin near Annamoe where his uncle resided. Synge had a great love for the granite mountains and moorlands of Wicklow and from an early age he would set off to explore and to strike up conversations with the locals or travelling vagrants. He always made a note of any unusual expressions or turn of phrase, and these often turned up in his plays. Many of the tales he collected and the characters he encountered were written into his work.

Although he was of the ascendancy class he had little time for the stiff formality of his peers. He preferred the stories and speech of the Irish peasants living in splendid isolation or to meet with the vagrants of the road. He admired the nomadic lifestyle of the vagrant, believing these individuals to be the repositories of Irish ure and folklore. He looked to the Irish peasants, the fishermen and the farmers, who lived close to the land, for the idea of the "consciousness of the Irish people". He believed that the people who had such close ties to the land were in turn affected by the mood of the landscape they inhabited. He also used this theory to great effect in his plays.

Synge is best known for his dramatic works eg. Playboy of the Western World but he is also recognised as an important collector of Irish folklore and his essays are a valuable source of social customs and beliefs of that time.

Synge died in 1909 from Hodgkins disease but he has left behind a valuable collection of plays, essays and poetry which provide great insights into the social history of rural dwellers at the turn of the century.

From the archives of An Chomhairle Leabharlanna.

From the archives of An Chomhairle Leabharlanna.

Still south I went and west and south again,

Through Wicklow from the morning till the night,

And far from cities and the sites of men,

Lived with the sunshineand the moon's delight.

I knew the stars, the flowers and the birds,

The grey and wintry sides of many glens,

And did but half remember human words,

In converse with the mountain, moors and fens.