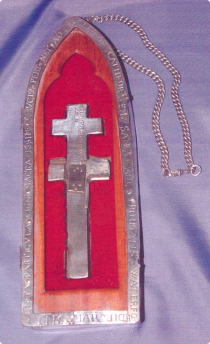 Strong tradition holds that this reliquary houses a piece of the True Cross. The shrine is inscribed in Latin

Strong tradition holds that this reliquary houses a piece of the True Cross. The shrine is inscribed in Latin

Strong tradition holds that this reliquary houses a piece of the True Cross and the double-armed cross shape of the shrine lends weight to that. The shrine is inscribed in Latin 'Wood of the True Cross'; it dates from the 11th century and the reliquary from 1620. The shrine is believed to have been a gift to the Cathedral at Waterford from Muircheartach O'Brien, king of Munster and great grandson of Brian Boru, and may have been a companion of the relic in Holy Cross Abbey, Co. Tipperary. It was Muircheartach who petitioned Rome for the appointment of Malchus, a monk at Winchester, as first bishop of Waterford in 1096. Following the appointment it is believed that Pope Paschal II (1099-1118) gave the relic to Muircheartach. It was known to have been revered in Waterford before the Reformation.

The reliquary is inscribed in Latin This particle of the Most Holy Cross belongs to the Cathedral Church of the Most Holy Trinity Waterford, Jesus Mary 1620. In the early 18th century bishop Richard Pierse, when forced into exile, entrusted it to the Aylward family in Cross, Co. Waterford. It passed in 1840 to Brother Joseph Murphy, member of the Irish Christian Brothers at Mount Sion (uncle of Margaret Aylward, founder of the Holy Faith congregation). Mount Sion returned it to the Cathedral in the 20th century.

collection: Waterford City Council by kind permission of the Bishop of Waterford & Lismore