This is a 12th century iron knife, consisting today of a blade and a handle-tang or core; the handle was of wood, bone, horn or other perishable material and is gone. All parts of the knife - blade, hilt band and end cap - except the tang contain copper-alloy plates containing decoration and texts. This was no ordinary domestic knife (it is bigger than the average domestic knife found in Waterford) but probably had a religious function.

It is similar to a late 12th/early 13th century knife found in Winchester (the blade only survives which has copper alloy plates on the back, is decorated in similar style but is uninscribed) and another more elaborate late 9th/early 10th century knife from Sittingbourne in England. The Latin inscription probably reads: "What is cut with this sharp edge, may it be filled with the powerful love of Christ." 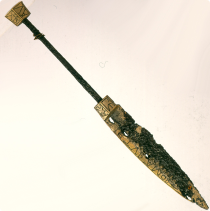 A 12th century iron knife, consisting today of a blade and a handle-tang or core

A 12th century iron knife, consisting today of a blade and a handle-tang or core

The knife was possibly used to cut the blessed but unconsecrated bread after mass for distribution to the poor.