Two paternosters, the medieval equivalent of the rosary beads, of light amber beads and used for telling prayers, were found in the Waterford city centre excavations. Cistercians in the 11th and 12th centuries allowed laybrothers and sisters to recite the pater noster instead of the 150 psalms and lessons, the beads helped with counting and were more for the fingers than the eye. This paternoster is incomplete and consists of six beads of various types, slightly superior to the beads of the complete paternoster though all are elegantly crafted.

Paternosters were usually worn hung from the girdle (belt) or round the neck and were long for women and short for men, sometimes only a few beads. Amber is fossilised resin from the shores of the Baltic and there is every reason to believe that these beads were crafted in Waterford. It is known that it was a specialised craft in Paris as early as the 1260s. The two Waterford paternosters and one other found in Cork are not only the earliest medieval amber paternosters but are also the only ones yet discovered. 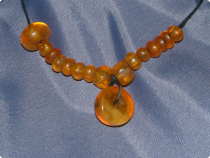