One of the most important pieces from the set of Waterford vestments, the only complete set of pre-Reformation vestments to survive in Britain or Ireland and belonging to Waterford's Christ Church cathedral. The T-shaped dalmatic is one of the six pieces of the High Mass vestments and is green brocaded velvet on cloth-of-gold ground with pomegranate design made in Florence about 1480, the figurative panels are of linen richly embroidered in gold thread and coloured silks in the famous Flemish embroidery workshops. It was worn by a priest - the pomegranate design is centered on the back (but not on the front) of the garment showing the pattern to its best as he would have had his back to the congregation during Mass. Two tassels hang on the back. The panels (called orphreys) show figures of single saints among whom are St. James the Less holding a fuller's club, St. Gregory the Great, mitred and holding a book; St. Agnes holding a cross; St. Dorothy a casket; St. Lawrence with a miniature gridiron; St. Matthew an axe and St. Jude an oar. The work is not quite as fine as that on the Magi Cope and unfortunately this vestment has been shortened.

The complete set consists of four Copes and a set of High Mass vestments, six pieces. The set follows the great cycles of the Old and New Testament from Creation through the life of Christ to the Redemption of Souls. The vestments have had a chequered history. In 1577 the Dean and Chapter of Christ Church Cathedral made Waterford Corporation custodians of their church plate and vestments 'in pledge' for the sum of Ł400, probably to keep in them in Catholic hands. But in 1637 a royal edict went forth for the proper and decorous performance of Divine Service in the various Protestant churches throughout the kingdom of Ireland. The Dean therefore demanded the return of the vestments but the mayor refused whereupon Lord Deputy Wentworth issued an order (on display in the museum) to the mayor. The vestments returned to the Cathedral. During Cromwellian times they were hidden in the vaults of the Cathedral and not rediscovered until 1773 when the medieval cathedral was demolished to make way for the present Classical building and were generously presented by the Protestant bishop to the Catholic dean. Placed for safekeeping in the National Museum of Ireland in the mid-twentieth century, two pieces of the set are on display in Waterford where they make spectacular viewing in the religion gallery. 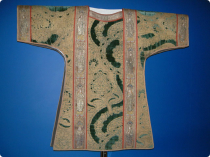 The T-shaped dalmatic is one of the six pieces of the High Mass vestments and is green brocaded velvet on cloth-of-gold ground with pomegranate design made in Florence about 1480.

The T-shaped dalmatic is one of the six pieces of the High Mass vestments and is green brocaded velvet on cloth-of-gold ground with pomegranate design made in Florence about 1480.

collection: Waterford City Council by kind permission of the Bishop of Waterford & Lismore

Previous - The Magi Cope
Next - Glassware