This ring is another example of the very fine jewellery found in the Waterford excavations and is either of antique Roman or Italian Renaissance origin as the gemstone depicts a classical motif - a man in armour putting his hand into a fire and making an offering.

The stone is sard or chalcedony and the engraving is carefully cut and polished and shows use of several tools. The ring may have been brought to Waterford by a clergyman or pilgrim returning from Rome. Incidentally the ring is of very wide girth. 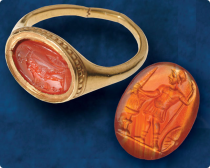