Bryan: The Great Earl Of Kildare 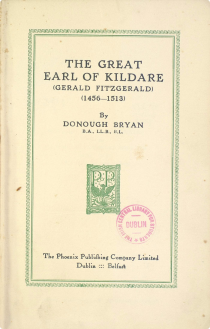 The Great Earl Of Kildare by Donough Bryan is a historical biography of Gerald Mór Fitzgerald, 8th Earl of Kildare (1456-1513) who became the most powerful Irish noble in Ireland in late 15th and early 16th century Ireland. Gerald was a descendant of Anglo-Normans who conquered Ireland in the 12th century. They established landowning Norman dynasties that eventually integrated into Gaelic Ireland. These 'Hiberno-Norman' dynasties remained nominally loyal to the English monarchy. The complex shifting politics of Ireland meant that the ‘Old English’ dynasties were frequently in alliance or at war with each other and with the endlessly quarrelling Gaelic clans.

At the time the city of Dublin and the area surrounding it known as the Pale was ruled by 'Anglo-Normans' who followed English customs and laws while much of the remainder of the country followed Gaelic tradition. Most 'Hiberno-Norman' families who ruled estates outside of the Pale, spoke Gaelic and intermarried with the Gaelic noble families. It was said that the dynasties were more Irish than the Irish themselves. The Fitzgeralds of Kildare however remained loyal to the English sovereign.

Gerald Mór was rewarded with the Order of The Garter, appointment as Lord Deputy in 1477 and inherited the title of Earl of Kildare in 1478. Edward IV had Fitzgerald removed and replaced with a more trustworthy English noble but the lords of the Pale forced him to reverse his decision. Gerald Mór retained his position when Henry VII defeated the House of York and overthrew Edward. The House of Tudor needed Fitzgerald as their ally to help crush both English Yorkists and Gaelic Irish rebels. The Earl Of Kildare took advantage of the situation to rule Ireland independently between 1477 and 1494 disobeying the King when it suited him and at one point supporting Lambert Simnel, a pretender to the throne.

In 1494 his enemies had him seized and sent to the Tower Of London to be tried as a traitor. Nonetheless Gerald Mór convinced Henry VII to reappoint him Lord Deputy. The King said of Fitzgerald "All Ireland cannot govern this Earl; then let this Earl govern all Ireland ." In 1500, Gerald Mór put down a rebellion in Cork city, led by yet another pretender to the English throne and put the mayor to death. In 1504, the Hiberno-Norman Burke family of Connaught went to war with the Anglo-Norman Fitzgeralds, with Gaelic clan allies on both sides. Fitzgerald defeated his opponents at the Battle of Knockdoe and took Galway city. However the Earl was killed in 1513 during another military campaign against another Gaelic rebellion.

After his death the title of Earl Of Kildare passed to his son Gearóid Óg. By then the power of the House of Kildare had become a noticeable threat to Tudor rule in Ireland . In 1534, Gearóid Óg was imprisoned in the Tower Of London . ‘Silken Thomas,’ his son and grandson of Gerald Mór, rebelled against the Tudor monarch, Henry VIII, after false reports circulated of his father’s execution. The Fitzgerald’s Maynooth stronghold was destroyed and following his defeat, Silken Thomas himself was executed in London . Afterward the power of the Lord Deputy was reduced and Henry VIII forced both Anglo-Norman and Gaelic families to recognise him as King Of Ireland.

Previous - Kildare
Next - Comerford: Diocese of Kildare and Leighlin