Carrigan: History and Antiquities of the Diocese of Ossory 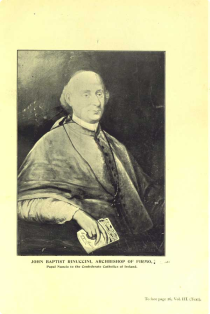 The History And Antiquities of the Diocese of Ossory by William Carrigan was published in four volumes in 1905. Established in 549 AD the diocese had approximately the same borders as the ancient Kingdom of Ossary . St. Canice established a Christian monastic community at what is now Kilkenny city on the site of the 13th century St. Canice's cathedral which still survives. The diocese has forty one parishes and almost one hundred churches.

The ancient Kingdom of Ossory was powerful in the 2nd century ruled by Aenus Osrithe and his descendants before it was conquered in the 5th century by the neighbouring Deisi tribe. The ancient rulers recovered their domain in the 7th century. One of the subsequent kings, Cerball mac Dúnlainge rose to prominence in the 9th century and played a leading role in the Danish Wars. Brian Ború, King of Munster defeated the forces of Leinster and the Viking allies at the Battle of Clontarf in 1014.

In later centuries the territory was ruled by abbots who controlled the local monasteries. The fortunes of the abbots were directly linked to their related chieftains. Following the Norman conquest in 1169 Kilkenny city became an important stronghold. Bishop Hugh De Rous built the St. Canice's Cathedral in the 13th century which still survives. Two other Bishops of Ossary, Hugh de Mapilton and Thomas Barry held the office of Treasurer of Ireland in the late 13th and earl 15th centuries respectively. Richard Northalis served as an ambassador of Richard II of England in the late 14th century.

During the English Reformation, Henry VIII broke with the Roman Catholic Church when he divorced his wife Catherine of Aragon and married Anne Boleyn. Henry also dissolved the monasteries, confiscated their wealth, declared himself King of Ireland and demanded loyalty from Old English nobles and the Gaelic Irish chieftains alike. The Butlers of Ormonde conformed to the state religion while the majority of the Kilkenny population refused to renounce their Catholic faith. Bishop John Bale tried in vain to impose Protestantism but was forced to flee. During the reign of Elizabeth I, no bishop was appointed for a period of seventeen years.

In 1641 the Gaelic Irish Catholics of Ulster rose in rebellion and massacred thousands of Protestant settlers. The centre of the Catholic Confederacy and Royalist cause during the subsequent civil war in Ireland was in Kilkenny and from 1641 to 1647 two-thirds of Ireland was effectively independent. However divisions between the Gaelic Irish and Old English and Protestant Royalists were exploited by Oliver Cromwell who conquered the country. The interference of Giovanni Battista Rinuccini, the Papal Nuncio, was crucial in undermining an effective strategic alliance between the Catholic Confederates and the Royalists and ultimately proved fatal to their cause. A generation later Catholics fighting for James I against the Protestant forces of William III of Orange were also defeated in 1690 at the Battle of the Boyne.

For much of the 18th century Catholics were brutally persecuted by a series of Penal Laws. They were relaxed gradually between the late 18th and 1829 when Catholic Emancipation was won by Daniel O'Connell. During this period Catholic priests were often fugitives and risked capture, torture and execution. After 1829 in common with the rest of the country, Kilkenny parishes began a program of church building while St. Kieran's College opened in 1837. The Cathedral of St. Mary's was completed in 1857 but no consecrated until 1899.

Famine hit Kilkenny and the rest of Ireland hard in the 1840s as the potato crop failure left a million dead from hunger and disease while a million more fled for a better life in America . The lattter half of the 19th century witnessed intense agitation by the Land League and the Irish Parliamentary Party led by Charles Stuart Parnell to secure the rights of Catholic tenant farmers. This drive was supported by the Catholic bishops of Ossary and by the turn of the 20th century the majority of the land in Kilkenny was owned by Irish Catholic farmers. The estates of the Butlers and other landed gentry were broke up and sold to their tenants.

By 1901 the population of the diocese was 83, 519 and was falling due to waves of emigration which continued into the 20th century following Irish independence in 1922. The Catholic Church in Ossary in common with the rest of Ireland held extraordinary power in Kilkenny as they provided hospitals, schools, assistance to the poor and heavily influenced public morality.

Previous - Anderson: Nooks and Corners of County Kilkenny
Next - Egan: The illustrated guide to the city and county of Kilkenny