Healy: History and Antiquities of Kilkenny 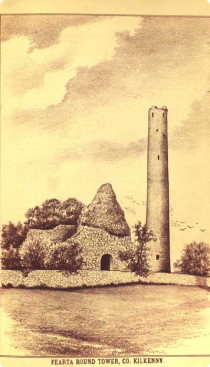 The History And Antiquities of Kilkenny (City and County) by William Healy was published in 1893. Healy documents the history of Kilkenny from earliest times until the late 19th century.

Kilkenny takes its name from the Irish Cill Chainnigh or 'Cell Cell or church of Cainnech '. St. Cannich or Canice established a monastic community in the 6th century. It became the capital of the kingdom of Ossary until the Norman conquest in the 12th century. Richard De Clare better known as Strongbow built a fortification which was later to become Kilkenny Castle and the stronghold of the Norman Butler dynasty who controlled the Earldom of Ormond. The walled medieval city of Kilkenny with winding streets and alleys sprang up on both sides of the River Nore. Kilkenny became a city by royal charter in 1609 during the reign of James I.

Kilkenny County has over 1,600 townlands that are studded with evidence of thousands of years of human settlement such as ring forts, burial mounds, dolmens, portal tombs and other remains. Early Christian settlements are also evident such as the round tower at Fearta. After the Norman conquest, Cistercian monks built Duiske Abbey, Augustinians established Callan Friary and Benedictines created Jerpoint Abbey. These powerful institutions were dissolved in the 16th century during the English Reformation by Henry VIII. There are also castle ruins throughout the county which are the best evidence of centuries of warfare.

The most significant period in the history of Kilkenny was that of Confederate Ireland. For centuries the Gaelic Irish had rebelled against the Old English, the descendants of the Norman conquerors and also intermarried with them. After 1366 a series of laws called the Statutes of Kilkenny failed to prevent the Hiberno-Normans from adopting Irish law, custom, costume and language. After the English Reformation, many of the Old English families refused to renounce Roman Catholicism and become Protestant.

After the Catholic Gaelic Irish rebellion in Ulster in 1641, the Old English joined forces with the Gaelic Irish, made Kilkenny their capital and ruled over two-thirds of Ireland , effectively as an independent state. However fatal divisions within the Conferacy over a strategic alliance with the Royalist cause and Charles I were exploited by the Parliamentarian leader Oliver Cromwell who launched an invasion of Ireland in 1649.

The royalist Butlers of Ormonde who were also Protestant steered a perilous course through the 17th century. After another Catholic defeat at the Battle of the Boyne in 1690 their Old English and Gaelic Irish contemporaries were dispossessed by the rise of the Protestant Ascendancy. The Butler dynasty survived, retained their titles and estates and remained at Kilkenny Castle until the 20th century.

For much of the 17th and 18th century the Catholic population of Kilkenny was oppressed by the Penal Laws which were gradually relaxed between the late 1700s and Catholic Emancipation in 1829. The Great Famine devastated Ireland in the 1840s as hunger and disease caused the death of over a million people. In Kilkenny as much as a fifth of the population emigrated with the population of Kilkenny city reduced by over ten percent. Waves of emigration followed well into the 20th century after Irish Independence in 1922.

At the time Healy wrote his work, Irish nationalists were had been campaigning intensely for land reform and by the turn of the 20th century much of the land in Kilkenny had been bought up by tenant farmers. The Anglo-Irish Protestant Ascendancy declined and in 1967 Arthur Butler, 6th Marquess and 24th Earl of Ormonde, sold the abandoned and deteriorating Kilkenny Castle to the Castle Restoration Committee for Ł50.

Previous - Egan: The illustrated guide to the city and county of Kilkenny
Next - Hogan: Kilkenny