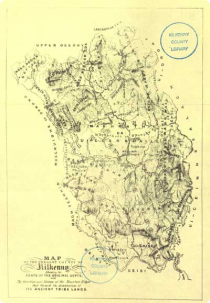 Hogan, John. Kilkenny: The ancient city of Ossory, the seat of its kings, the see of its bishops and the site of its cathedral. Kilkenny: P.M. Egan, 1884.

Hogan, John. Kilkenny: The ancient city of Ossory, the seat of its kings, the see of its bishops and the site of its cathedral. Kilkenny: P.M. Egan, 1884.

Kilkenny by John Hogan was published in 1884. Kilkenny or Cill Chainnigh which means “Cell or church of Cainneach/Canice ” grew up around the 6th century monastic settlement founded by St. Canice that was later the site of the 13th century St. Canice’s Cathedral. It was an important Norman town in the Middle Ages and officially became a city in 1609.

By the 8th century Cill Chainnigh was a major monastic centre, the seat of the Kingdom of Ossary and the Diocese of Ossary which moved there from Aghaboe. In the 12th century the Norman conqueror Richard De Clare built a castle which later became the seat of the Butler dynasty, the Earls of Ormonde, who lived in Kilkenny Castle until the 20th century. A walled medieval town was begun on the banks of the River Nore under the direction of William Marshall. The area around St. Canice’s came to be known as Irish town while the Anglo-Norman area protected by the walls was called Hightown.

Civil wars in England , the burden of the Crusades, the Black Death and Gaelic Irish rebellion weakened English rule in Ireland . Dublin and the Pale remained English while the Norman families in the rest of the country were absorbed into Gaelic society through intermarriage adopting their customs, dress, laws and language. In the 14th century the Statutes of Kilkenny were a series of laws passed in a vain effort to prevent the Gaelic assimilation of the Hiberno-Normans. Following the English Reformation, many of these Old English families in common with the Gaelic Irish refused to renounce their Catholic faith.

Subsequent English monarchs introduced English and Scottish Protestant settlers to Ireland in an attempt to transform Ireland into a Protestant country. The Ulster Plantation begun in 1609 led to a Gaelic Irish rebellion in 1641. The Catholic Confederation made up of rebellious Old English nobles and their former Gaelic Irish enemies established themselves in Kilkenny and ruled over two-thirds of the Ireland until the Cromwellian invasion of Ireland in 1649.

Divisions over an alliance with the Royalists and Charles I led to infighting that ultimately spelled the total military defeat of the Catholic Confederacy by the Parliamentarians in 1653.

In the late 17th century there was renewed war as the Catholic James II and Protestant William III of Orange fought for control of the British throne. James II spent the winter of 1689 at Kilkenny Castle before his forces were defeated at the Battle of the Boyne in 1690.

The Penal Laws and the rise of a Protestant Ascendancy beggared much of the Irish Catholic population. By the 19th century most were desperately poor illiterate peasants who survived on a diet of potatoes. A series of famines and crop failures in the 18th and 19th centuries culminated in the Great Irish Potato Famine of the 1840s when over a million died of hunger and disease across Ireland . Kilkenny city lost a tenth of its population and a fifth of the population of County Kilkenny was lost to emigration.

The latter part of the 19th century witnessed agrarian agitation by the Land League and the Irish Parliamentary Party. A series of land acts secured the rights of Irish tenant farmers who bought out the Anglo-Irish Protestant landlords by the turn of the 20th century. The Butlers of Ormond declined and in 1967 Kilkenny Castle was sold for Ł50 to a restoration committee.

Previous - Healy: History and Antiquities of Kilkenny
Next - Meehan: The Confederation of Kilkenny