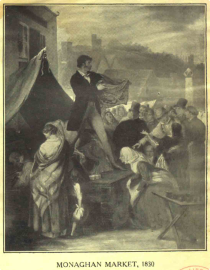 A History Of Monaghan For Two Hundred Years: 1660-1860 by Denis Carolan Rushe (1852-1928) was published in 1921. It covers the history of County Monaghan from the Restoration to just after the Great Irish Potato Famine when Deasy's Land Act abolished feudal rents.

Monaghan was the domain of the Gaelic MacMahons and other clans until the conquest of Ireland during the reign of the Tudor and Stuart monarchs and the Lord Protector Oliver Cromwell. Most of the land of Ireland including Monaghan was taken from the native Irish and given to Protestant planters.

In 1660, the English monarchy was restored when Charles II, the son of the executed Charles I, was invited to return to England by the English Parliament. Anti-Catholic laws in force since the final defeat of the Catholic Confederacy by the Parliamentarians in 1653 were no longer as severely enforced while a degree of religious tolerance returned along with the re-establishment of the Anglican Church.

Most Catholic nobles had supported Charles during his exile and the Royalist cause during the English Civil War. There was an expectation that Catholic lands would be returned after they had been confiscated and given to Protestant settlers. Meanwhile Irish Protestants expected to retain their lands without any further interference.

A compromise was reached and Catholics were given one fifth of the land in Ireland . Charles' death in 1685 was followed by the reign of the Catholic James II who set about reversing the English Reformation and was supported by the Catholic Irish. Ireland became the battleground between the Catholic Jacobite forces and army of William III of Orange who was victorious at the Battle of the Boyne in 1690.

Thereafter a Protestant Ascendancy would govern Ireland with most Catholics reduced by the penal laws to the status of tenant farmers and landless peasants. Among the most important Anglo-Irish Protestant families in Monaghan were the Dawson, Westerna, Forster, Shirley and Leslie dynasties.

From the late 17th century until the late 19th century, Catholics in Monaghan were discriminated against religiously, politically and economically. The Penal Laws implemented soon after the Williamite victory did not begin to be repealed until the late 18th century. In 1829 Catholic Emancipation was achieved and Catholics in Monaghan were no longer excluded from the political process. However in the 1840s the Great Irish Potato Famine ravaged the poor of County Monaghan with thousands dying from hunger and disease while thousands more emigrated to America and elsewhere.

In 1860, Deasy's Land Act (named after Attorney General Rickard Deasy) was passed abolishing the system of feudal rents and began the campaign for agrarian reform that would dominate the remainder of the 19th century. The Land League and Irish Parliamentary Party secured a series of reforms which led to Irish tenant farmers buying out bankrupted landlords by the early 20th century. Monaghan became a border county after the partition of Ireland in 1922 into the Free State (later the Republic of Ireland ) and Northern Ireland .

Denis Carolan Rushe was born in Monaghan in 1852, educated at St. Louis Convent, MacCartans' seminary and later Trinity College Dublin before becoming a solicitor in 1878. He served in a variety of roles such as president of the Monaghan conference of the Society of St. Vincent De Paul, Secretary of the Fermanagh Board of Education and Secretary to Monaghan County Council from 1899 to 1924. He was also a supporter of the Gaelic League and a local historian. He died in 1928.

Previous - Monaghan
Next - Rushe: Monaghan in the Eighteenth Century