The Campaigns and History of The Royal Irish Regiment 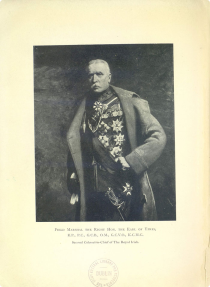 General French was Commander-in-Chief of the British Expeditionary Force sent to France in 1914 during the opening stages of the First World War. The Royal Irish Regiment saw heavy fighting with the BEF.

General French was Commander-in-Chief of the British Expeditionary Force sent to France in 1914 during the opening stages of the First World War. The Royal Irish Regiment saw heavy fighting with the BEF.

The Royal Irish Regiment was an infantry regiment formed in 1684 as the 18th Regiment of Foot by Lord Granard who amalgamated independent Irish companies. The Royal Irish served the Protestant King William of Orange in the Williamite War (1689-91) against the Catholic James II. It went on to serve the Duke of Marlborough during the War of the Spanish Succession (1701-1717). The Royal Irish served as a colonial garrison in the New World and fought in the Battle of Lexington and Bunker Hill during the American War of Independence (1776-1783) and participated in the French Revolutionary and Napoleonic Wars (1793-1815).

In the early 1880s, the Boers or Dutch settlers in South Africa, revolted successfully against British rule and created the South African Republic. However in the Second Boer War (1899-1902) British forces recaptured the South African Republic and also conquered the neighbouring Orange Free State, creating the Union of South Africa as part of the British Commonwealth. The Royal Irish Regiment participated in the campaign in which British forces suffered heavy casualties, a foreshadowing of future conflicts.

In 1914, World War I began when Great Britain, France, Russia and later the United States and their allies, went to war with the central powers led by the German, Austria-Hungarian and Ottoman empires. The Royal Irish Regiment was incorporated into the 10th and 16th Irish Divisions of General Kitchener’s New Army. Many of the soldiers in these units were Irish nationalist members of the Irish Volunteers. Their Unionist counterparts in the Ulster Volunteer Force joined the 36th Ulster Division.

The Royal Irish Regiment first saw action at Mons with the British Expeditionary Force or BEF of approximately 80,000 men which was rushed to the French frontier to delay the German advance on Paris. The Commander-In-Chief of the BEF was Field Marshall John French. The Germans sought to outflank the Allied forces with a gigantic right hook through the Low Countries aiming for the Paris. The BEF inflicted heavy casualties on the enemy in a fighting retreat. French reserves were mobilized just in time and halted the German offensive with an immense counterattack at the Battle of the Marne.

For the next four years there was a stalemate on the Western front stretching from the North Sea coast to the Swiss border. The Royal Irish Regiment was expanded by a further seven battalions and took part in major offensives designed to break the deadlock. The Battle of the Somme saw nearly 60,000 British casualties on the first day alone. Trench warfare was characterised by an intense opening artillery bombardment on the enemy lines followed by near suicidal infantry assaults across open ground or 'no man's land' swept by enemy machine gun and artillery fire. Advances were often measured in yards with horrific loss of life.

New weapons and tactics co-ordinating the use of artillery, tanks, aircraft and infantry broke the deadlock. The war eventually ended with the collapse of German and Austrian morale and the defeat of the Central Powers in 1918.

The Royal Irish also saw action in the Middle East against the Ottoman Turks. In 1915 they were part of the British IX Corps landing at Suvla Bay in the Gallipoli Campaign. The campaign was designed to open the Dardanelles Strait for the Royal Navy to enter the Black Sea. Stiff Turkish resistance meant the landing force did not get far from the shore and after heavy casualties the effort was abandoned. Meanwhile in Macedonia, the Royal Irish also assisted the Greeks and Serbs who were fighting the Bulgarians and Austrians.

In 1917 the Royal Irish Regiment as part of the British XX Corps took part in the capture of Gaza and the defeat of the Ottoman armies in Palestine. The Turkish Ottoman Empire, which included modern Turkey, much of the Arab Middle East and the Balkans, fell apart after the end of the war in 1918.

At home in Ireland, elements of the Royal Irish Regiment took part in the defeat of the 1916 Easter Rising in Dublin. Field General French was appointed British Viceroy, Lord Lieutenant of Ireland and Supreme Commander of the British Army in Ireland. However after the Irish War of Independence (1919-21), with the creation of the Irish Free State, the Royal Irish Regiment was disbanded along with other Irish units. The subsequent Irish Civil War (1922-23) saw many Irish veterans of World War I join the National Army and take part in the defeat of the anti-Treaty IRA.

Lt-Col George Le Mesurier Gretton was born in Adelaide, Australia in 1850. During a distinguished military career in the British Army he once held the rank of Major with the 3rd Battalion of the Warwickshire Regiment. He was married twice and after retiring from the military became a barrister of law. A son and grandson also went on to have distinguished military careers. He died in 1934.

Brigadier Stannus Geoghegan (1866-1929) had a long distiguished military career followed by a retirement devoted to writing military history. His oldest son also named Stannus, a 2nd Lieutenant serving with the Argyll Sutherland Highlanders was killed in action at Passchendaele in 1918.

Previous - Department of External Affairs: Cuimhneachan 1916-1966
Next - Taylor: A History of the Rise, Progress and Suppression of the Rebellion in the County of Wexford in the Year 1798