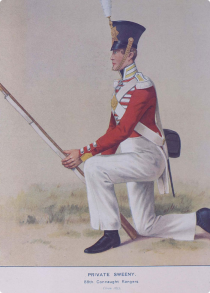 A typical early 19th century infantryman of the 88th Connaught Rangers. He wears the traditional 'redcoat'of the British Army and is armed with the famous 'Brown Bess' musket. The majority of the enlisted men serving in the Connaught Rangers were drawn from the west of Ireland.

A typical early 19th century infantryman of the 88th Connaught Rangers. He wears the traditional 'redcoat'of the British Army and is armed with the famous 'Brown Bess' musket. The majority of the enlisted men serving in the Connaught Rangers were drawn from the west of Ireland.

The Connaught Rangers, 2nd Battalion, Formerly 94th Foot by Lt. Col. H. F. N Jourfain and Edward Fraser is a history of one of the most famous Irish units of the British Army from its Scottish origins in the late 16th century until its disbandment in 1922. The story of the Connaught Rangers includes much of the military history of Ireland and the British Empire . The regiment drew the majority of its recruits from across the west of Ireland .

In the Middle Ages, England became the dominant nation in the British Isles and conquered Wales , Ireland and Scotland . Following the 16th century Protestant Reformation, the English fought repeated civil wars and defeated continuous Catholic Irish and Presbyterian Scottish rebellions. This was achieved by raising Welsh, Scottish and Irish as well as English troops. By the late 19th century and early 20th century the United Kingdom of Great Britain and Ireland had established a global empire.  The existence of the British Empire would not have been possible without the contribution of Irish soldiers such as the Connaught Rangers who fought in every major conflict between the late 16th century and the early 20th century.

Traditionally the European continental powers such as Spain , France , Germany and Russia could field enormous armies but had weak navies. The British army remained relatively small while the Royal Navy became the dominant force on the world's oceans preventing the invasion of the British isles and enabling Britain to establish colonies across the world. Units like the Connaught Rangers were used to conquer or to guard these far flung possessions while native colonial troops were also raised from the populations of conquered peoples.

For much of European history following the Middle Ages, the greatest rival of England and later Great Britain was France . In the late 17th century and early 18th century, Louis XIV fought repeated wars against an alliance of European powers including Britain . As Britain colonized America it fought both France and Spain for dominance.

Britain eventually lost its American colonies in 1783 while the French Revolution was followed by the rise of Napoleon who threatened to make France the dominant European and global power. During the conflict the British Army increases in size to over 250,000. The Connaught Rangers fought in the Iberian peninsular theatre where Napoleon suffered an important defeat before his eventual overthrow in 1815.

The history of the British Empire in the mid to late 19th century was marked by a series of colonial wars. The Connaught Rangers fought again in the 1850s, first in Crimea against the Russians and later in India where native Indian colonial troops mutinied against British rule. In the 1870s the Connaught Rangers participated in the defeat of the tribal Zulus of South Africa and Maoris of New Zealand. In 1899 the British fought a bloody war against the two independent Boer republics of South Africa which were eventually conquered. The Connaught Rangers suffered heavy casualties that foreshadowed the Great War over a decade later.

By the late 19th and early 20th century, a military standoff existed between the Triple Alliance of Britain, France and Russia and the Central Powers which included Germany , Austria-Hungary and the Ottoman Turks. An arms race, military build up and rising tensions exploded into global war in 1914. In Ireland , unionists and nationalists were on the brink of civil war before their differences were temporarily put to one side as tens of thousands joined the British Army. Overall millions of men across the British Empire volunteered or were conscripted.

The Connaught Rangers were expanded in size to accommodate the influx of recruits and heavy losses. They served on a number of fronts in Europe and the Middle East . In major battles the rangers suffered heavy casualties especially during the Battle of the Somme in 1916 when the 6th Battalion lost 23 officers and 407 other ranks during one week of fighting alone.

By 1918 when the war ended the political situation in Ireland had changed dramatically. Home Rule agitation was replaced by radical Irish republicanism after the 1916 Easter Rising awakened hard line separatist sentiments and also widespread hostility to the attempted introduction of conscription to Ireland. Between 1919-1921, IRA guerillas made Ireland ungovernable forcing the British to the negotiation table. The result was the creation of the 26 county Irish Free State in 1922.

Southern Irish units of the British Army including the Connaught Rangers were disbanded. However during the Irish Civil War between 1922-1923 many Irish World War I veterans joined the new National Army to fight die-hard IRA guerillas who refused to accept the terms of the Anglo-Irish Treaty. In the remainder of the 20th century and into the 21st century generations of Irishmen from the Republic of Ireland and Northern Ireland continued to serve in the British military.

Previous - Hussey De Burgh: The Landowners Of Ireland
Next - Ledwich: Antiquities of Ireland