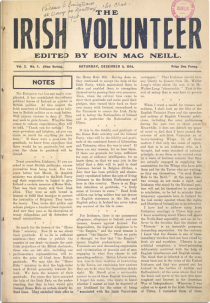 The Irish Volunteer edited by Eoin MacNeill (1867-1945) was the newspaper of the Irish Volunteers, an Irish nationalist military organisation created in 1913 in response to the creation of the Ulster Volunteer Force, an Unionist militia founded to oppose the implementation of Irish Home Rule. The newspaper contained political and historical articles, poetry and features on military tactics.

The Irish Volunteer edited by Eoin MacNeill (1867-1945) was the newspaper of the Irish Volunteers, an Irish nationalist military organisation created in 1913 in response to the creation of the Ulster Volunteer Force, an Unionist militia founded to oppose the implementation of Irish Home Rule. The newspaper contained political and historical articles, poetry and features on military tactics.

The Irish Volunteer edited by Eoin MacNeill (1867-1945) was the newspaper of the Irish Volunteers, an Irish nationalist militia created in 1913 in response to the creation of the Ulster Volunteer Force founded to oppose Irish Home Rule. The newspaper contained political and historical articles, poetry and features on military tactics.

Unionist leaders Edward Carson and James Craig formed the Ulster Volunteer Force in 1913 after nearly 250,000 unionists signed the Ulster Covenant in 1912 pledging to resist Home Rule. They threatened to set up a Provisional government in Ulster if the province became part of a Home Rule settlement. British Army officers at the Curragh, Co. Kildare sympathetic to the unionists refused to enforce Home Rule in Ulster and German weapons were landed at Larne by militants seeking to arm the UVF.

Alarmed Irish nationalists created the Irish Volunteers in November 1913 with a membership of under 200,000. The secretive oath-bound Irish Republican Brotherhood sought to take control of the Volunteers, launch a rebellion and create an Irish Republic. Professor Eoin MacNeill became a figurehead chairman of the Irish Volunteers, but was fully aware of their plans. The IRB scheme was thwarted by the Irish Parliamentary Party leader, John Redmond MP who positioned his own supporters on the ruling council.

After the passage of Home Rule legislation in May 1914, Ireland was on the verge of civil war. Hundreds of German rifles were successfully landed by Irish republicans at Howth in July. The same day British soldiers who unsuccessfully attempted to seize the weapons fired on a hostile crowd in Dublin city centre killing three and wounding many more.

The outbreak of World War I in August 1914 split the Volunteers. The majority renamed the National Volunteers supported Redmond who encouraged Irish nationalists to join the British Army. Thousands of these men went on to fight in World War I. The minority Irish Volunteers were left with about 13,500 members. But heavy Irish casualties in the war led to growing disillusionment and opposition to war, a collapse in support for Redmond and the decline of the National Volunteers.

Meanwhile IRB members in the Irish Volunteers prepared for a rebellion timed for Easter 1916. The radical Irish nationalist Patrick Pearse lost patience with the Home Rule movement. He and others convinced MacNeill to support them by claiming the leadership was to be arrested and that Sir Roger Casement, had secured a shipment of 20,000 German rifles. When Casement was captured in County Kerry and the ship transporting the weapons was intercepted by the British and scuttled by its crew, MacNeill called off the rebellion. However Pearse and his supporters joining forces with the radical socialist James Connolly's Irish Citizen Army, captured the General Post Office and other buildings in Dublin on Easter Monday, 24th April 1916 before declaring an Irish Republic .

However only about 1,200 rebels turned out in Dublin and about 2,000-3,000 in the remainder of the country. By the end of the week the rebellion was crushed by thousands of British troops in Dublin . After the rebels surrendered, Pearse, Connolly and others were tried and shot while Casement was hanged in London. Eoin MacNeill himself was sentenced to life imprisonment while 3,500 others were also rounded up. The Sinn Féin political party led by moderate Irish nationalist Arthur Griffith was erroneously blamed by the British government for organizing the rebellion.

Following an amnesty, most rebels including MacNeill were released in 1917. The rebels had been taunted by Dubliners as they were transported to captivity but now were hailed by many as heroes. Irish Volunteer membership soared as it underwent re-organisation and was renamed the Irish Republican Army while new leaders such as Michael Collins and Richard Mulcahy emerged. Sinn Féin now led by Eamon De Valera after it was taken over by radical republicans benefitted from an attempt to introduce British Army conscription in Ireland . Politically discredited, Redmond died in 1918 before Sinn Fein eclipsed the IPP in the British general election.

In 1919 Sinn Fein MPs declared an Irish Republic and the IRA began the Irish War of Independence (1919-1921). This successful guerilla war against British forces in Ireland led to the Anglo-Irish Treaty and the creation of the Irish Free State and a Unionist dominated Northern Ireland . Divisions between Irish republicans after the Treaty led to the Irish Civil War (1922-1923) in which the National Army defeated the IRA. Former Irish Volunteer comrades fought on opposite sides and in subsequent decades bitter political divisions lingered between the two largest Irish democratic political parties that emerged in Dail Eireann, Fine Gael and Fianna Fáil.

Eoin MacNeill was elected an MP for Sinn Fein in 1918, supported the Anglo-Irish Treaty and became Minister for Education in the first government of the Irish Free State but lost a son who fought on the Republican side in the Civil War. He lost his seat in 1927 and returned to his academic career. Eoin MacNeill died in 1945.