O'Donavan: Annals of the Four Masters

The Annals of the Four Masters is an iconic history of Ireland. It is the most extensive compilation of the ancient annals of Ireland. This work influenced the writing of national history from the 17th century onwards. Its importance increased when the annals were edited and published in seven volumes between 1848 and 1851 by the great scholar John O’Donovan. 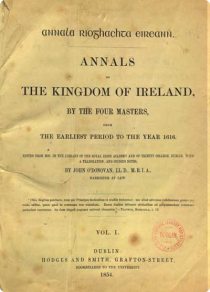 O'Donavan, John. Annals of the Kingdom of Ireland by the Four Masters, from the earliest period to the year 1616. Dublin: Hodges and Smith, 1854

O'Donavan, John. Annals of the Kingdom of Ireland by the Four Masters, from the earliest period to the year 1616. Dublin: Hodges and Smith, 1854

Originally called the Annals of the Kingdom of Ireland, this chronicle of Irish history from prehistory to 1616 AD was compiled by the Irish Franciscans. The entries which are sparse and meager during the earlier period grow less so as the "Annals" progress.

In the early 17th century, there was a period of massive upheaval in Ireland which included the Flight of the Earls in 1607. The Irish Franciscans began to reassemble the documentary evidence of Ireland’s history.

Michael O'Clery, a native of Donegal, was a trained antiquary and poet, descended from a long line of scholars. He was sent from Louvain to Ireland in 1626 to collect manuscripts relating to the lives of the Irish saints. While in Ireland, however, he had the idea of collecting all the ancient vellum books of local annals throughout the country and writing a new kind of all-encompassing ‘Annals of the Kingdom of Ireland.’

He went to a secluded convent in Donegal for the duration of his project, which commenced for himself and his fellow labourers on the 22nd of January, 1632, and concluded on the 10th of August, 1636. His forebodings as to the fate of the original vellum material that he worked from were prophetic. Scarcely one of the ancient books which he brought together with such pains has survived to the present day.

The language the “Annals” were written in is very archaic language, difficult to understand, even then, except by the most learned. The Annals detail the reigns, deaths, genealogies, etc. of the high-kings of Ireland, the provincial kings, chiefs, and heads of distinguished families, men of science, historians, poets, etc., with dates given as accurately as the Masters are able to give them. They record the demise and succession of saints, abbots, bishops, and ecclesiastical dignitaries. They tell of the foundation and occasionally the overthrow of countless churches, castles, abbeys, convents, and religious institutions. They give meager details of battles, murders, tribal wars, wars with the foreigners, battles with Norsemen, Normans, and English, and political changes. Sometimes they quote ancient verses in corroboration of the facts they mention, but none are quoted prior to the third century.

In O’Donovan’s work, the Irish text is given with a translation into English and an abundance of the most valuable notes, topographical, genealogical, and historical, accompanies this. The whole is contained in seven volumes. Irish history survived in the "Annals of the Four Masters" and in O'Donovan's translation, and the name of O'Donovan will long be synonymous with that of O'Clerys.

Previous - O'Brien: Fifty Years of Concessions to Ireland
Next - O'Donavan: Tribes and Customs of the Hy-Many