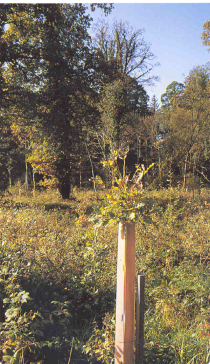 Oak sapling in a protective tube at Tomnafinnoge Wood. Selective felling of mature oaks over the centuries has reduced the Shillelagh woods to a remnant of their former glory. However, public ownership and some enlightened management may save the remaining from extinction. (Richard Nairn)

Oak sapling in a protective tube at Tomnafinnoge Wood. Selective felling of mature oaks over the centuries has reduced the Shillelagh woods to a remnant of their former glory. However, public ownership and some enlightened management may save the remaining from extinction. (Richard Nairn)

Walking beneath the mighty oak and beech trees, shafts of sunlight pierce the canopy of bare twigs and sparkle on the surface of a slow-moving river. A rustle in the deep foliage of bilberry might reveal some grazing deer.

Landscape: Tomnafmnoge is the last surviving fragment of the great Shillelagh woods which once clothed the hills and valleys of south Wicklow. As early as 1444 these woods supplied timber for the construction of Kings College, Cambridge, and later for Westminster Abbey, St Patrick's Cathedral and Trinity College Dublin. In 1634, the woods were estimated to cover 'more than many thousand acres', but from then on they were heavily exploited especially for shipbuilding. In 1670, the woods were reported to be still extensive, 'being nine or ten miles in length' and a valuation in 1671 found a total of 3905 acres (1579 hectares) of woodland here.

The present oaks were planted within an existing coppiced wood in the mid-1700s when there were still extensive native woods in the locality so it provides an important link between the ancient forest of Shillelagh and the woodland of today. It occupies the valley of the Derry river which flows in a south-west direction to join the Slaney. Unlike many other Wicklow woodlands, Tomafinnoge is growing on deep, fertile soils, the lowest of which are liable to winter flooding.

Habitats: This is mature deciduous forest with a relatively open canopy ted by oak and beech with some Scots pine and a few other exotic conifers such as western hemlock. The standard trees are widely-spaced so that the crowns are well developed and still allow plenty of light to penetrate to the woodland floor. As a result, the understorey of holly, hazel with young oak and beech is extensive. In some areas, the evergreen rhododendron threatens to shade out the natural regeneration but grazing is light and the ground layer of bilberry, woodrush and brambles is luxuriant in places. Under the dense shade of beech, the ground is naturally bare but supports some interesting fungi in autumn.

The river that flows through the woodland is braided in places into a series of streams with much marshy ground and an interesting mixture of wetland and woodland plants. The river bank has willow, alder, birch and dogwood in addition to hazel, holly and birch and the undergrowth here is quite impenetrable. The dampness of the woods has produced a heavy growth of epiphytes such as mosses and polypody fern growing on the branches of the trees. Clean air has also encouraged the growth of lichens such as Usnea and Evernia.