The Christy Kiernan art Collection is the name given by Westmeath County Council to a collection of paintings commissioned from artists in Westmeath for use on its annual calendar between the years 1992-2002. This collection features several important paintings inspired by the lakes of Westmeath.

Among the artists featured in the collection are:

Terence O'Connell, b London 1948 who has lived at Collinstown, Co Westmeath since 1977. His work in watercolours is meticulously detailed and he has drawn much inspiration from the lakes of North Westmeath.

The Library in Castlepollard has two additional works by O'Connell.

Anna Marie Leavy a native of Donegal and graduate of NCAD has lived in Westmeath since 1971. She works both in watercolours and acrylics.

May Raleigh studied art at the National college of Art, Dublin. A native of Mullingar she was a versatile and talented artist and a gifted teacher. She is strongly represented in the art collections of both Westmeath County Library and Westmeath County Council. Her painting 'Mute Swan' is one of the highlights of the Christy Kiernan art collection. 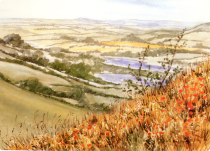 Majestic view from the Ben of Fore

Majestic view from the Ben of Fore

Mary Clifford a native of Tralee and graduate of Limerick College of Art has lived in Athlone since 1979. Her painting 'Majestic view from the Ben of Fore'shows a view across the lakes.

Kevin Flood grew up on the Longford-Westmeath border, a graduate of Dun Laoghaire School of Art and NCAD he is one of the most talented artists working in the Irish midlands.

Other artists who have been inspired by the Lakelands of Westmeath include Tom O'Reilly, Diarmuid Larkin, Terry Murphy and Simon Daly. There are also thriving amateur art groups in the county and their exhibitions regularly include paintings of lake scenes.

Previous - Inspiration of the Lakes
Next - Literature