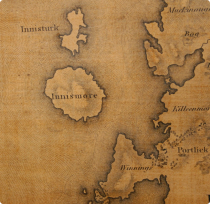 As its name suggests Inchmore is the largest of all the islands on Lough Ree.

It is situated in the parish of Bunown and the Barony of Kilkenny West in County Westmeath.

The island consists of 132 acres and 32 perches and at the time of Griffith's Valuation in 1854 it was held by the Marquis of Westmeath though we know that he did have other people resident on the island.

On high ground at the south end of the island is a ring-fort indicating that this island knew human habitation from early times. Throughout Ireland ring-forts survived, largely due to superstition, they were often called fairy-forts and it was considered unwise to interfere unduly with them; therefore farmers worked around them rather than risk the wrath of the spirit world. In reality these ring-forts were protected enclosures for human habitation. During the early Christian period such an enclosure would have contained shelters both for man and beast. The farmers who lived here were strong farmers, possibly the family who founded or supported the local church. The original house, like the fort itself, was circular in shape with one or two living chambers. Nothing will survive except perhaps the post holes. The most likely building material would have been hazel which would have grown locally in abundance.

The monastic ruins on Inchmore consist of one featureless church on the north side of the island. The foundation is attributed to a fifth century monk, St. Lioban (or Liberius), the son of Lossenus.

Some time before 1170 Inchmore had apparently become a priory of the Canons Regular of St. Augustine. The Augustinian canons became by far the most widespread religious order in 12th C. Ireland. The priory of Canons Regular of St. Augustine on Inchmore was probably dependent on the larger monastic settlement of All Saints at Saints Island, Co Longford.

From Church to State

In 1567 Sir Henry Sidney, Queen Elizabeth's deputy in Ireland, and the man responsible for building the first stone bridge across the Shannon at Athlone, recommended to her majesty that the Baron of Delvin, a member of the Nugent family of Westmeath, be granted Inchmore on Lough Ree. Elizabeth acceded to Sidney's request and the lands of Inchmore were granted to the Baron of Delvin for a period of twenty years.

Despite the twenty year grant the island obviously remained with the family for considerably longer. A further grant recorded in the Calendar of Papal Documents relates that in 1635 the Pope permitted the Earl of Westmeath to retain the property during the schism. The Papal grant was made on condition that if the schism should come to an end that the earl would restore the abbeys to whatever orders had previously held them. The Nugent estates were very considerable and quite apart from Inchmore they also held the lands of Fore which had a very large monastic site.

Previous - Inchboffin
Next - The Marquis of Westmeath