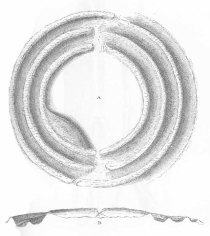 Plan and sectional view of Rathdrummin, the large tri-vallate ringfort near Dunleer (from Wright's Louthiana 1748, Bk. I, plate VII)

Plan and sectional view of Rathdrummin, the large tri-vallate ringfort near Dunleer (from Wright's Louthiana 1748, Bk. I, plate VII)

Ringforts are the most numerous and widespread field monuments in Ireland, their original number being most recently estimated at approximately 45,000 (for further details, see Stout 1997). They consist of an area, usually circular but occasionally oval, D-shaped or rectangular, enclosed by one or more earthen banks and fosses (rath) or by stone walls (cashel). They are also distinguishable from other types of enclosures by their characteristic siting pattern and the presence of an entrance, usually on the eastern side. 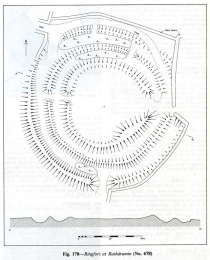 Although comparatively few ringforts have been excavated, it is accepted that they had a long period of use, from perhaps Early Iron Age times (300 BC - AD400) to as late as the 16th century in the west of Ireland. The vast majority appear to have been enclosed farmsteads of the Early Historic Period (AD c.400-1100). Their comparatively small size (generally between 20-60m in diameter) suggests that they were occupied by single extended families. The interior of the ringfort would have contained domestic houses, farm buildings and storage places. The enclosing bank(s)/wall(s) and fosse(s) acted as a barrier to protect livestock from raiders and wild animals, and also as an indication of the status and resources of the occupants.

Wright's drawing of the fort at 'Rath' is intriguing on a number of levels. Firstly, it is today, as it was in the 18th century, the finest ringfort in the county. The circular living space is (52 m in diameter) is enclosed by no less than three substantial earthen banks giving it an overall diamater of 105 metres. Wright's inclusion of it in Louthiana demonstrates that he had good local contacts as it is not a site that a traveler is likely to stumble across, then or now. Secondly, his drawing shows it completely devoid of growth whereas it is now mantled in dense scrub. This reminds us that the Irish landscape has changed much since the 1740s when the needs of a growing population for fuel resulted in the consumption of huge areas of scrub and bushes from hedgerows and wasteland.